Can we build a home for an MLS team? Yes, we have the space

Here are two shots of a model of BMO Field (home of Toronto FC) placed in the north end of the Starfire Sports complex. Assuming we can find some public funding for one of the cheaper recent MLS stadiums and put it among the largest soccer complexes in Puget Sound, building an MLS stadium sounds feasible.

Here is an article from the Seattle Business Journal (thanks Goal Seattle) about a plan to build a stadium on the location in the shots below. 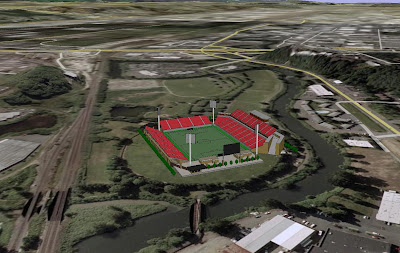 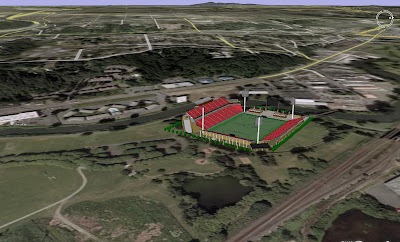 Posted by Emmett at 11:47 AM No comments: Links to this post

Email ThisBlogThis!Share to TwitterShare to FacebookShare to Pinterest
Labels: Soccer

Don't look too closely at initiative election results in Seattle. The light will blind you.

This is going to sound a lot like the post below, but I don't feel just like updating an old post. Back in November Dan at the Seattlest wrote "Why Major League Soccer Is Never Coming To Seattle," which pretty much tries to make the same point that Goldy made back in April.

I-91 was incredibly popular so don't even try to ask Seattle folks for any more money for sports stadiums. Case closed. Go away. We mean it. Seriously.

Here is my response to Goldy, in which I point out two things:

1) No one fought I-91, so its not a very fair representation of how a contested election, with a less easy to hate enemy, would end up.

2) King County residents voted in high numbers for the Seahawks Stadium, basically pushing the initiative over the line.

And, then my post below. Soccer stadiums are a lot cheaper than multi-purpose basketball stadiums (public contribution ~$40 million compared to $300 million). And, the legislature passed public support legislation for two sports facilities (including a new hockey arena in King County) and no one raised a fuss.

If the MLS doesn't succeed in King County, it won't be because the political environment isn't supportive.
Posted by Emmett at 10:20 AM No comments: Links to this post

Can we build a home for an MLS team? Yes we have the money

I recently bitched too early over at Washblog about losing the USL-1 Sounders to an MLS expansion team in a couple of years. Now I think its a pretty good idea, but there have been some concerns about whether its possible to build a new soccer specific stadium in Washington, or whether given the crash and burn effort of the Sonics to get a new arena is poisoning the well for public financing of sports arenas.

“Renton is a very interesting site because of the demographics and the growth that I have seen around that area and the land that is available,” James Keston said. “And based on what has happened with the Sonics, they’ve already gone through the first stages of this: the making sure that the community and the city at least have an interest in a potential stadium there.”

The Sonics issue is their failure to gain public money for a new home even with the threat of relocation.

The only real hangup there is a stadium. The Sonics are having major problems trying to get something built and I doubt after footing the bill for both Safeco and Qwest that the taxpayers there will go for something new for the Sonics, much less an MLS team. No stadium=no team as far as MLS is concerned.

Instead of looking at the Sonics for the future of the MLS in Seattle, we should pay closer attention to the efforts of hockey teams, horse people and community theaters. While the efforts of the Sonics to gain public funding for a new stadium went down in flames, a hockey arena in Kent, a horse dome in Lewis County and two community theaters are going to be built with public money allocated in the last legislative session.

Also, while the Sonics arena would have cost King County taxpayers about $300 million average public contribution to each of these smaller projects was much less. The new Amiga Center at Kent will cost the state just more that $30 million of the total $67 million cost.

And, the MLS stadiums being built around the country today are right in line with the projects the state funded this year. Even if you look at the most expensive stadium in Salt Lake, $150 million for the entire project is not out of line. I could see someone making and argument for a state contribution of $30+ million to an $80+ million park along the lines of Pizza Hut Park in Houston near Dallas (thanks Blue Lightning). Heck, the stadium in Toronto only cost $62 million.
Posted by Emmett at 7:56 PM 2 comments: Links to this post

Where will Radio Open Source go?

Until this morning, I don't think I realized how much time I put into contributing to the conversation at ROS. Not as much as many, but it took a good chunk of my spare seconds on the internet.

Now that ROS is on hiatus (that doesn't sound good and damn you unnamed brand-name media company), I'm wondering what the ultimate fate of the show will be. It doesn't sound very experimental, but a radio show with a blog (or a blog with a radio show) but actively trolling the internet and the listeners of the show has been refreshing.

I wouldn't listen to the show nearly everyday if it wasn't for that. I feel involved in the show, like what I say matters, so I listen. That was the secret that Joe Trippi was writing about at the end of "The Revolution Will Not Be Televised," that a project that actually listens to the people its focusing on (I wouldn't say audience here) will succeed.

What I'm hoping is that ROS survives as a public radio show and a blog and podcast. I'm also hoping that other radio products take on the ROS way. Not just putting up a blog and lamely tending it, but stoking the fire of conversation there and on-air.

If there's enough room in the world for The Sound of Young America and Jesse Thorn, there is enough room of Radio Open Source.
Posted by Emmett at 8:31 AM 1 comment: Links to this post

The Other Side wonders:

Oh one more thing….Do you really think he was named after the “dinosaur dog” in the Flintstones? Just wondering.

Probably not. Dino Rossi was born in October 1959, while the Flintstones debuted about a year later in September 1960.
Posted by Emmett at 5:57 AM No comments: Links to this post

I never actually believed that the Thurston County Democrats were ever elitist, but now even Particle Man (who does things that particles can) can agree that the above statement is true.

After working since January to open our membership to non-Precinct Committee Officers, the central committee voted earlier tonight to give every member not only a voice, but a vote.

My favorite moments during this debate included Ivan Weiss's talk last month on how open membership has really made a difference in his King County legislative district organization (I was thinking "Ivan for Governor" after his talk).

The other came tonight when uber-member Rhenda Strub talked about walking her precinct. Rhenda's not a PCO, but she takes on that most common of PCO tasks. She said that no one asks her whether she's a PCO, they don't even ask what her name is, they know who she is, she's that crazy Democratic woman. Nice.

Anyway, I'm glad this happened. We have a lot of work in Thurston County and the more folks that feel invested in our organization, the more work we can pile on to them.

Which brings me to a point that an opponent of the bylaw change made. There should be something in what we ask members for in terms of their commitment to our organization. Originally, I'd asked that we require members to volunteer before we give them the vote. But, taking into consideration the hours it would take to manage such a requirement, while also realizing you get more volunteers with an incentive rather than a requirement, changed my mind. Excellent point though.
Posted by Emmett at 10:10 PM No comments: Links to this post

Going to see Griffey on Sunday

At least one is going to see him on the day we're going up. She bought tickets in center field so she can be near him.

I remember exactly when I heard that he was leaving, I was working at a bank at the time, just before I'd graduated college as was headed back to being a reporter. I was setting up an employee event at a golf club, and I heard it over the radio. The folks there drug out a boom box and set it up so we could listen to the coverage.

Since then, my memories of the Mariners have been colored by the absence of Griffey. 2001 happened despite not having Griffey (or A-Rod or Randy Johnson).

Our falling down the stairs since then has been paralleled by Griffey's own trip down the stairs.
Posted by Emmett at 8:30 AM No comments: Links to this post

There is a new game that I've been addicted to the last couple of days that shows you how redistricting is truly the important detail in our democracy.

And, California is thinking it might want to give a citizen jury the job of redistricting, rather than political hacks.
Posted by Emmett at 4:04 PM No comments: Links to this post

Suddenly I'm so into Soccer again

It all started with this book, but now I'm writing posts about the Sounders at Washblog, doing an open soccer league wiki and recording Gold Cup games on Univision.

I played soccer until I moved back out to Washington. I tried pretty lamely to get plugged into the soccer scene here, but my team was sucked up into several other teams before we even played a game. Then I stopped even following it until I realized how easy it is to follow, you just have to look around a bit.

Tacoma Tides
Yellow Fans
Seattle Sounders
Goal Seattle (and blog)
Posted by Emmett at 10:23 AM 1 comment: Links to this post

Email ThisBlogThis!Share to TwitterShare to FacebookShare to Pinterest
Labels: Soccer

Someone with some good information on Archie Binns came by and edited the wikipedia page last week. Which is sort of great, because I'm going to start the Laurels Are Cut Down this week.
Posted by Emmett at 10:20 AM 2 comments: Links to this post

I noticed in a comment I received yesterday that I am being accused of spreading hearsay. I did not spread the rumor that Mary Verner would not file. I merely noted in the aftermath that it had been a rumor. Regardless of that, if I were to choose to post rumors it the prerogative of this blogger to do so.

In a conversation I recently had with Jim Camden regarding content he spoke of old style journalistic practices of verifying sources and ensuring that the information he is writing about is true and accurate. Bloggers however are not professional journalists we write as a hobby, we write what we enjoy and we write what we hear. If I didn’t enjoy what I’m writing I wouldn’t be writing this at all.

I always find it funny when folks try to get blogging to equal shoddy journalism. That can't be true in most cases, because often times, blogging isn't trying to be journalism as much as shooting bull over the phone is All Things Considered. Yes, there are some journalists that are also great bloggers. And, yes blogging should be taken seriously (sometimes, not all the time). I would like to be taken seriously, but I realize that I'm not.

Posted by Emmett at 9:10 PM No comments: Links to this post