During the snow storm last week, someone (not the city) put up olyroads.com and olympiaroads.com, which showed weather related road closures across town. It seems to be a simple trick of pulling information from olympiawa.gov and republishing it on a mobile friendly website, but its interesting enough.

Aside from calling it the wrong thing (its not a mobile app, its a mobile friendly web page), it does show the need for some services that in a very simple way and on a local level, let you know what is going on out there. I sent an email to their contact address, asking if they were thinking of branching out into other road related information (construction updates).

One thing does bug me, there's no information about who set the site up. No name on the site itself, no name on the email I got, and the domain registration is anonymous as far as I can tell. That's weird.
Posted by Emmett at 2:20 PM No comments: Links to this post

Snapshot Olympia (circa 1999): "Having money is less important than doing something"

This is a VHS to Youtube quality video is really worth the watch, a lot of good stuff to take from what this video calls the DIY culture in the late 90s. Here's just a few other thoughts:

1. Strange b-roll shot of the Spooner Berry farm at around 2:20.

2. This movie is like a first cut of a portion of "Go with the Flow," which if you haven't seen, is awesome. You can check it out from the library here.

3. There is a quote at about 9:15 where someone is talking about how they approach a new project. The first step is going to the library and researching as much as they can about it. I like that sentiment.

4. What ever happened to the Olympia Film Ranch? I saw some references to it on the OFS site today, but nothing at all direct as if it was a happening thing.
Posted by Emmett at 12:52 PM No comments: Links to this post

2011 Northwest Book Mission: On second thought with The Big Burn

Me over on Goodreads:


What struck me most about this book was the discussion of the political debate at the time. This will sound as more naive than I am, but nothing has changed in terms of how political debate happens.

Towards the end of the book, Egan points out that Pinchot understands how events need to have a narrative, and the side that succeeds in creating the most compelling narrative wins.
My only criticism would be that the end of the book seems a bit disjointed when he tries to tie up lose ends. Otherwise, great book.

(UPDATED 2-24-11) On second thought: I think this book missed some major points of view. Well, maybe not missed them, but I think Egan messed up by focusing too much on Roosevelt and Pinchot and not enough on Ed Pulaski.

In the book, the constant coming back to Roosevelt and Pinchot took away from the history of the fire itself and made it more about their personal history. If Egan had focused more on Pulaski, I think he could have a much more fruitful narrative on the relationship between East Coast and Mountain West. Pulaski seems to embody the well meaning but frustrated attitude towards the East that almost embodies the Moutain West. By making too much of Roosevelt and Pinchot, Egan makes Pulaski seem unreasonable. Even, when in the actual history, he is the most reasonable of all the players.

Posted by Emmett at 12:55 PM No comments: Links to this post

In the past few years I've been in the habit of noting a book of local interest and then filing it away for later reading. While they've been a large part of my reading list for years, since my time to read has been narrowed, they've been falling by the wayside.

So, this year, for no other reason that the list of books to read has gotten to long, my book mission is to polish off as many of these as I can. Here's the list of read and to-read books so far. The big ones I've tackled so far have been Winter Brothers, Breaking Blue and the Big Burn. I was actually surprised by how good a read Winter Brothers was the second time around (didn't even get through the first chapter on the first try).

Also, I should be posting my reviews here as well as Goodreads. I have a "on second thought" review of the Big Burn, which I'll try to post today.
Posted by Emmett at 12:48 PM No comments: Links to this post

There's something going on here (people writing about Olympia)

After awhile of the Olympian shrinking and Olyblog be-bopping along after a couple of pretty good years, there are a few things worth noting about people writing about Olympia.

1. Everyday Olympia is back. More centered now just Mathias, it is back at least. I'm sad all of the old content is disappeared, but at least the site is moving forward.

2. I've pointed it out before, but Olympia Power and Light is on the internets. Yeah, this is important. I wish now they'd do a podcast. That would be cool, Matt Green and Meta Hogan talking every two weeks about Olympia and the most recent issue.

UPDATE: I didn't notice that Matt Green is co-hosting Joe Ford's KAOS show, which I suppose is a sort of podcast, minus Meta. It helps if they keep on posting the mp3s too.

4. Olympia NewsNW shows how varied this entire local writing about Olympia scene can be. Based on news in context (I'm still not really sure what that means other than it being pretty cool what they're doing), I'm hoping they start doing stuff on a regular basis.
Posted by Emmett at 2:43 PM 2 comments: Links to this post Posted by Emmett at 8:28 PM No comments: Links to this post 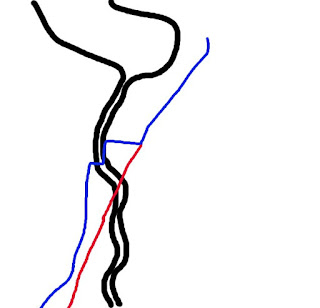 For over a decade before Interstate 5 uprooted the blocks old downtown Tumwater, the city was already abandoning its water-falls based history and moving south.
Posted by Emmett at 6:47 PM 1 comment: Links to this post

The next two roads in Tumwater that really interest me are the railroads. The Olympia Tenino/Port Townsend Southern Railroad and the Olympia Terminal/Union Pacific and the transition between the two show how roads changed Tumwater and how they changed the focus of Tumwater.

The Union Pacific line (while it did connect through a branch down to the old Olympia brewery site then on saltwater) is certainly new Tumwater. And, through ownership changes in the early 1900s, both lines became owned by the same company (Union Pacific) and the latter replaced the former in connecting Tumwater to the Olympia waterfront.

In geography, here's the difference between the two lines. The Port Townsend line ran through west side of what is now the Tumwater Falls Park. Much of the current trail is actually the old rail road grade. It continued down the west side of the Deschutes River (now Capitol Lake) until reaching saltwater near where Tugboat Annies is now.

You can see the Olympia terminus of the Port Townsend line in the famous Olympia birds eye (from UW Digital Collections).

You can see some of the Tumwater stretch in this picture from the Washington Historical Society.

While the Port Townsend Line sunset in 1916, the Union Pacific (former Olympia Terminal Line) was being completed just a year earlier. This is the current line when you think of the Olympia Brewery. Going down Custer Way, this is the line you cross over. The one obstacle that the road had to face to get from up on the east bluff to downtown Olympia and the waterfront was the bluff itself. The solution was a tunnel under Capitol Boulevard.

You can kind of see the railroad tunnel to the left (we're looking south back into Tumwater).

What's interesting to me is that while the new railroad, the railroad that started drawing Tumwater up and away from the river, seems so tiny compared to I-5. While tunneling under Capitol Way created a nice short cut for the railroad, it pales in comparison to the obliteration of the same hillside by I-5 just decades later.

All references in this post come from two wonderful books by James Hannum, that I wrote about here.
Posted by Emmett at 10:40 PM No comments: Links to this post

Here's another view of the old main road between Olympia and Tumwater that is now just a back street in South Capitol.

Posted by Emmett at 10:30 PM No comments: Links to this post