A data-based perspective on racism in Gonzalez v. Danielson

My historic look didn't drill down very far, just looked back in time a bit. But, if you do look down into the voting precincts, as this paper does very well, you find racism present in the vote:

The Yakima and Grant County results indicate that racially polarized voting exists in Central Washington and crosses party and ideological lines. While voters in these counties have consistently voted for more conservative candidates in most recent elections, Danielson outperformed all other candidates, and by very large margins. This is remarkable considering he did not campaign at all. In a similar Supreme Court election, conservative candidate Douglas McQuaid, who also did not campaign at all, received only 28 percent of the vote in Yakima, compared to 64 percent going for Danielson. Not only did Danielson significantly outperform McQuaid, but he also won more votes than the leading Republican candidates for U.S. Senate and Washington Governor who both campaigned vigorously during the election. The data show that Danielson received votes from the same precincts who preferred Cantwell to Baumgartner and Inslee to McKenna. This is in spite of Danielson raising no money, holding no campaign events, making no public statements, and receiving no meaningful endorsements. Voters in Central Washington, who were not provided a voter’s pamphlet, preferred Danielson to González in a party-neutral contest. This patterns revealed here a are textbook definition of racially polarized voting.

Holy freaking best kept secrets of Thurston County! Can you believe this even exists around here? 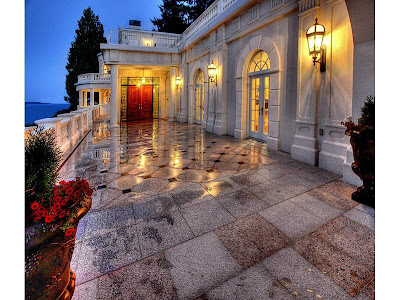 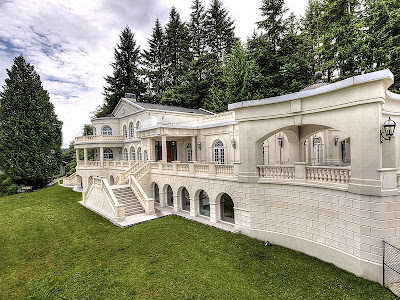 And, that at least according to the public information on the house, it was built in 1911? Well, not this house really. It probably looked a lot different back then.

The story of how this house came to be apparently begins in the early 1990s when California entertainment executive Charles Brack (who died in 2010) bought the house. Because Brack had some legal issues with his neighbors involving his bulkhead, we're able to read a little bit about what changes the house underwent:


The Bracks purchased the property at the tip of Johnson Point, immediately adjacent to Grundy's property, in 1991.

The Bracks extensively renovated and expanded the existing house on their property between 1993 and 1998.

Calvin Brack's son-in-law, Keith Gibson, testified that the Bracks have invested approximately $8 million in remodeling the home and structures on their property.

The Bracks' property included four separate tax parcels when they purchased it. Grundy asserts the Bracks raised the bulkhead to create dry land for building sites.

The Bracks contend it was necessary to raise the bulkhead in order to complete planned landscaping.


What I was most interested in was what the house looked like before the Californians got their crack at it. From the state Department of Ecology's shoreline photography program, I was able to find these two shots (from 1992 and 1970): 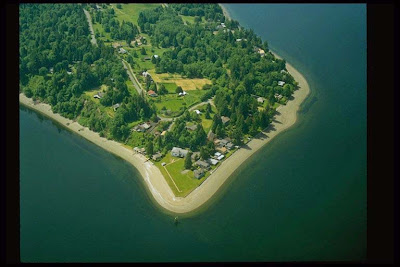 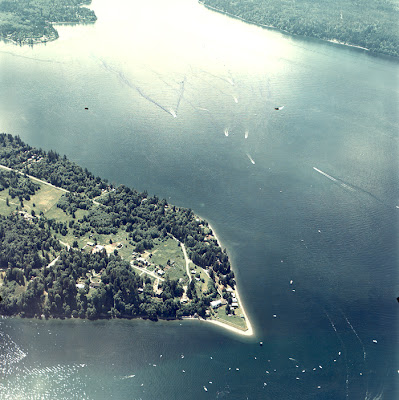 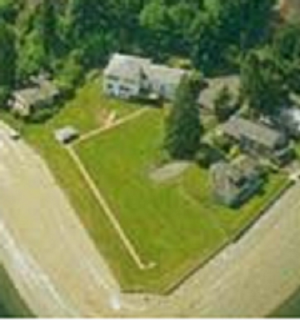 Significantly different than the post-Californian version.

And, in terms of the owners (the Bracks), they seem to be pretty interesting themselves. Charles Brack, until 2006, was involved in running KDOC, an independent television station in Orange County. He was listed as CEO of the station when it was sold.
Posted by Emmett at 9/29/2012 11:09:00 AM No comments: 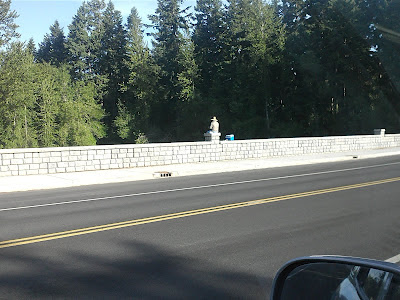 Way back last spring, people were spitting mad that the new Carpenter Road along Lake Lois had walls to it, blocking the view of the lake. From Ken:


Put me in the camp of those who think the City of Lacey made a mistake when it built the new Carpenter Road and put a wall between the drivers and Lake Lois.

Those driving on the new Carpenter Road can no longer see Lake Lois because the wall separating the roadbed from the lake is too high.

That’s what happens when engineers design a bridge and leave out the public in the review process, although I’m not certain a novice would even have understood the wall design even if they had seen the plans.

I drive that part of Carpenter almost every weekday, and since the construction finished, I've noticed a lot more people taking advantage of the new wall (as you can see above) as a defacto fishing pier.
Posted by Emmett at 9/23/2012 06:52:00 AM No comments:

Email ThisBlogThis!Share to TwitterShare to FacebookShare to Pinterest
Labels: lacey

Catching up with September (Olyblogosphere links for September 21, 2012)

1. This is one of the most unique and touching covers of Olympia, WA.

2. Cascadian meadows in spring can be pretty, from Mojourner Truth.

3. Little late in the linking, but I always appreciate Russ Lehman's take on local politics.