Sue Gunn reconnected the ends of the Cascadian political spectrum

I've been toying with this idea of there being a special sort of political spectrum in Cascadia. It would be along the lines the circle political spectrums you see from time to time, where the conservative and liberal wings join at the top and bottom, implying there are two political centers. I'll try to explain this later, but the moderate middle right join would include elements of suburban, government and business friendly themes. Everyone works together to make a happy life.

And, where the ends meet at the bottom, the more extremes of the standard left to right spectrum would join together with elements of traditional Cascadian anti-corporate, anti-oppressive government themes. Anti-corporatism on the left and the right is actually a long held position in Cascadia. It was one of the original fights in founding Oregon.

So, while its fun to sketch out little theories like that, its even better to find real world examples. Right now, Sue Gunn is leading Jeff Davis in a tight Olympia port commission race here in Thurston County. Even though its the Olympia port, the elections is held county wide.

Over the course of the race, some political observers have had a hard time putting their finger on Gunn's position in the political world. If she was a liberal, why is she against a tax supported county-wide port? If she's a conservative, why is she such an environmentalist?

From a letter to the Olympian:


This year, Red Sue is a hardheaded fiscal conservative, preoccupied with lowering taxes and running the Port of Olympia at a profit — or so she says in Works in Progress and on her campaign website.

But on an environmentalist website, she’s Green Sue, claiming that she’ll refuse all timber and proppant contracts because they’re bad for the environment — thus depriving the port of several of its most lucrative sources of revenue. This would cost quite a few jobs and increase our taxes, the very thing Red Sue deplores. But not to worry, Green Sue proposes to close down the marine terminal entirely and turn it into a park.

This certainly would be true if we were on a flat spectrum, but in a round one, Gunn could find a comfortable spot near the bottom, where the libertarian left and right join together.

So, this map showing Gunn winning in both rural south county and urban Olympia illustrates here campaign bringing together these camps. This is not a traditional election map in Thurston County, by the way. 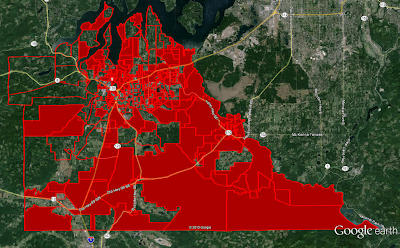 When you zoom in on Olympia, you really see the detail of her victory. You can see a band of Jeff Davis areas surrounding Gunn's urban vote. But, in turn, surrounding those suburban neighborhoods, you see much more conservative rural areas. 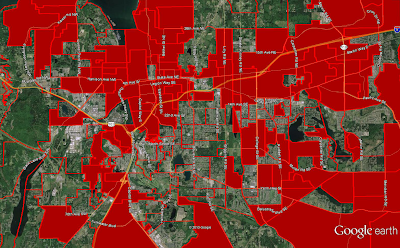 In her apparent victory, Gunn was able to move the political center from the typical moderates the lean both left and right on a political spectrum, way to the other side of the circle. Her victory was based on liberals who didn't like the direction of the port using public money to support private interests and conservatives who felt the same way.

Except they fail to understand one goes from Conservative to far right Libertarian, and then to the extreme right the Anarchist... More or less in the center are the "Moderates" Liberals/Progressives (name may vary) Fascist, Socialist, and on the extreme Left are dictators and one party systems....then there are social values were are on another line ... But take abortion, A conservative may want the government out of the abortion issue completely (it is not listed in the Constitution so it is a state or local issue), or a conservative may want to ban abortion (protection of Life). Conservatives tends to believe that people are not perfect and hence there needs to be check and balances, within the government, and outside of the government (Free Press/Media, School Choice, freedom of religion, etc.) ... the Left believes in the perfectibility of humans. But it good to think about how the flow of power goes....