Tim Sheldon gets moola from GOP

Four years ago Sheldon gave the GOP about $10,000. Now, after his victory over Democrat Kyle Taylor Lucas, they're begining to return the favor.

Citizens Alliance for a Legislative Majority, a new PAC in Washington funded mostly by seed money from the Republican State Leadership Commitee, gave $500 to Sen. Sheldon earlier this month. 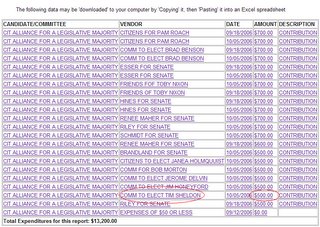 Not that he needs it.

(The Republicans really considered him one of their own anyway)

If Republicans are giving money to Sheldon, who is donating to his Republican opponent, Mark Shattuck? 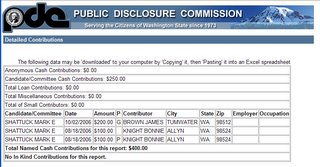 That's right, two people for a total of $400 have donated to Republican Shattuck's campaign, $100 less than what the State Republicans gave to his opponent Democrat Tim Sheldon.
Posted by Emmett at 10/11/2006 02:12:00 PM

Mark Shattuck gets my vote. I voted for Kyle Lucas, in the primary, but State Law prevents Lucas from running as a write-in candidate, in the General Election. I'm not going to vote for Sheldon, so I'm going to register my vote *against* Sheldon, in the only way available to me. Vote Shattuck!