Olympia neighborhoods, which ones are community friendly?

Over at Olyblog, we're sort of talking about the recent election and why some neighborhoods voted one way. Former city council member Matthew Green posted up and gave a great comment. He fell apart in my mind when he said that SE Olympia lacks community because of the lack of small community businesses.

This may be a circular argument, but SE Oly lacks small businesses because it lacks the zoning for these sorts of businesses. If the city wanted small community shops down here, they could have designed them in.

Here's what I'm talking about. 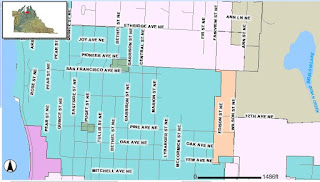 The only color to pay attention to here is green. In this map, the green colors represent the Puget Pantry (middle of the map), the San Francisco Bakery and a corner store (both towards the top). 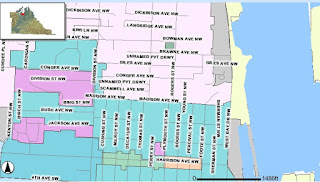 This area includes the Harrison commercial area, but also the west side Food Co-op is located right in the middle of a neighborhood. Also, notice the gray zoning along the water, which is mixed use commercial. 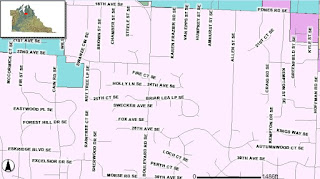 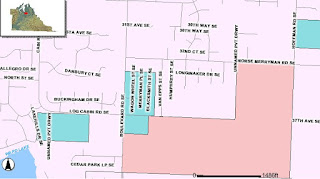 Two maps for this side of town, so its an even more startling example of homogeneous zoning that excludes the kind of small local businesses that Matt was talking about. Up on the north side of the top map is the Pit Stop Market, and aside from the Boulevard Nursery, there isn't another local business on this side of town. Weird that the nursery is actually zoned residential.

So, here's the question, which comes first: the zoning or the business? Does the zoning come along because someone wants to open a business in a particular location? Or, does the zoning allow a business to be opened? I'd say the second one is more likely in my mind.

If the city were to allow a certain number of businesses to open in residential areas, then maybe we'd see more local businesses in SE Olympia.
Posted by Emmett at 12/01/2007 07:37:00 PM