Did Jon Halvorson scrub Judy Wilson from his website?

Before Judy Wilson decided she was going to run for Thurston County Commission again Jon Halvorson had her endorsement listed proudly on his website. Makes sense, right? Former Republican county commissioner, she brings both experience and cross-party cred to his endorsment list.

One of Halvorson's selling points is that he's endorsed by a lot of county level pols, including at one point (more later) Judy Wilson, a former county commissioner. The question was, now that Judy is running, would he endorse her back, pitting himself against sitting Democratic commissioner Cathy Wolfe?

Check out his new endorsement list here and check out the old list, archived here and screen shot below: 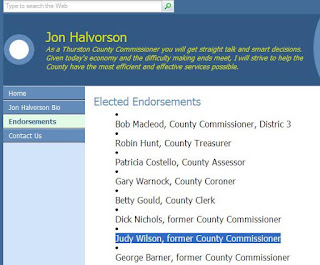