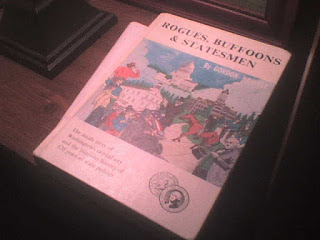 Truly, the best book about Olympia and maybe Washington politics through the 1970s. Its a shame that no one has taken up the task of updating this book (or writing a sequel).

Generally speaking, the books tells the story of Olympia from main street and the Capitol. Gordon was an old time newspaper guy in Olympia, so he had great background for both Olympia scenes. He also lived early enough in Olympia's history that the really old stuff really wasn't that old to him. It is oft-referred to, but seldom seen. There are only six copies in the Timberland system, a few of which don't circulate.