Matt over at if on a rainy night:

Every time I drive up Capital Boulevard (which is funny since it’s actually south and I equate going up with going north) and by the old brewery I see the land in between where the railroad tracks head toward the river and over to the Valley Athletic Club I think that it would be a perfect spot for a soccer stadium. How cool would it be to take the bus on a Saturday afternoon over here, donning a jersey and joining several thousand other Olympia fans as we cheer on our local team to promotion. I am not asking for much, just something along the lines of Fratton Park in Portsmouth or Fulham’s Craven Cottage.

I have the same sort of thoughts Matt does.

So, in that vein, I give you Deschutes Park (version one and two), home of Tumwater AFC. 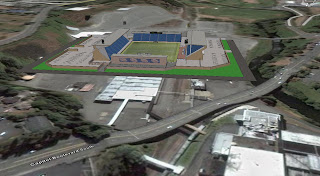 This is upper-division Tumwater AFC's home from the north. In this reality, Tumwater AFC plays in this world's American version of League 1, always playing for promotion to the MLS where they can play the Seattle Sounders. 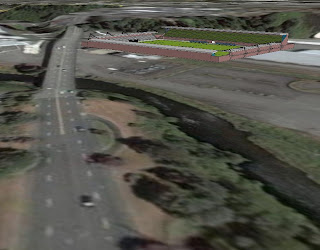 This is lower division Tumwater AFC's stadium from the south. They probably play somewhere in this reality's North American version of the Northern Premier League. Semi-pro, but still good.
Posted by Emmett at 6/09/2008 12:06:00 PM

Email ThisBlogThis!Share to TwitterShare to FacebookShare to Pinterest
Labels: other blogs, Soccer