The financing of Tim Eyman's campaigns are more tied to a small number of large contributors than a large amount of small ones. His failure as a leader of a popular movement continues.

Remember in early May when Tim Eyman said that he'd have to mortage his home to the tune of $250,000 to raise enough money to fund I-985? Ever wonder how that turned out? 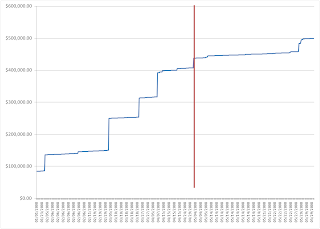 Basically, since he made a call to his supporters, the campaign has collected less money than before he made his call to supporters. While there have been almost as many total contributors in the month after May 1 (227) than there were in the four months before (298), that increase in total contributions has hardly made a dent in what Eyman had said he needs to raise ($250,000).

And, it seems like from eye-balling his reports, those individual contributions are petering out. There were 108 contributions processed on just on May 14, but only 100 in the two weeks since then.