Forwarded by a fellow Thurston Dem: 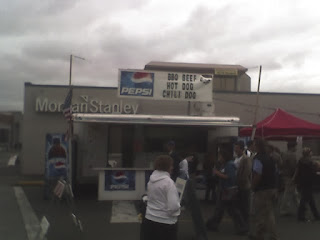 Just a couple of thoughts.

Their sign isn't very big, but with the wilting upper right hand corner, can you see that this is the Republican booth at Lakefair? I didn't get down this far (only as far north on Water Street to get a Demo burger and an Elephant Ear), so I didn't see this myself.

Maybe they didn't have a big enough sign to be able to say "Thurston County Republicans?"

Maybe they didn't have enough money for a second sign that said "Thurston County Republicans?" And, why don't they sell burgers?

Maybe they're guilty of the same distraction as Dino Rossi. Maybe no one will realize they're Republicans?
Posted by Emmett at 7/24/2008 02:00:00 PM

What was hilarious to me about the Republicans' booth was that on Sunday I saw a couple of handwritten signs for candidates along with 1 Dino sign.

Apparently they really needed to sell some burgers to afford yard signs for candidates.