R. Scott trying to change the past (it seems) to cover-up blog/LTE plagarism thing

Things have been moving, people have been doing things since I noticed a letter to the editor which looked exactly like a blog post I had just read.

First looks like blog author, our own R. Scott, has been changing things to make everything look ok.

The post in question now carries a notice "Source: anonymous email submission," but I'm 100 percent sure that wasn't there the first time I read the post last week or yesterday when I noticed the similarity with the letter.

And, why would someone submit a piece anonymously to a blog and then to the Olympian as well? Newspapers don't take anything on an anonymous basis.

And, R. Scott has changed the original post and since there are ways on the internet to see if you've changed something, check it out: 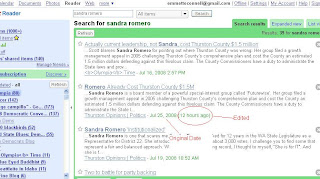 This is a picture of my feed reader, Google Reader, Saturday morning. What it shows is the post in question, its original date July 25, 2008 and when it was last edited (12 hours ago on Friday night).

So, R. Scott changed his post, most likely to add the note of the anonymous submitter after all of this started Friday morning.

It is still pretty likely that the letter was plagiarized. But, if it wasn't then R. Scott plagiarized the original anonymous version by taking credit for it.

Either way, the fun does not end there. Late on Friday night, R. Scott also published a press release on his blog, which he also quickly took down. Here's a link to where it was and another screen shot: 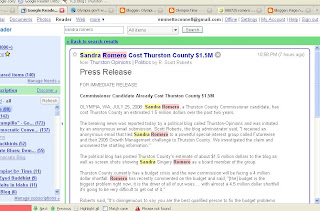 
So why send a press release pointing out that Sandra Romero is a board member of Futurewise? This isn't a mystery to anyone, especially since its actually listed at her own website. And, that Futurewise sued the county for not doing its job... do you think that anyone who has been paying attention didn't know that already?

Also, since the Olympian reported on the cost of the lawsuit back in April, what's the point of sending a press release pointing out an already reported fact?

What's more likely is that R. Scott wanted to point to his "anonymous email submission" in public.

There's nothing definite there so I can't say for certain that any of my suspicions are true, but the things that happened in the last few days do nothing to allay them.

The letter was likely copied from the blog. Either the letter writer didn't think anyone would notice or she just didn't care.

Email ThisBlogThis!Share to TwitterShare to FacebookShare to Pinterest
Labels: other blogs, Thurston County