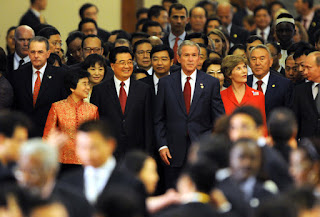 Other than some early morning soccer games, I watched the first night of Olympics last night, pushing these thoughts to the front.

From one of the best political books I've read:

For those concerned about democracy and freedom in our world, there is no more important place than China. ...A decisive step by China onto the road to democracy would by itself -- in population terms -- be no less significant than each of the previous "waves" of global democratization. Indeed, it might well bring many of the remaining dictatorships in the world through to democracy.

The survival of liberty in our land increasingly depends on the success of liberty in other lands. The best hope for peace in our world is the expansion of freedom in all the world.

Email ThisBlogThis!Share to TwitterShare to FacebookShare to Pinterest
Labels: democracy