Because you can't kill something deader than dead. 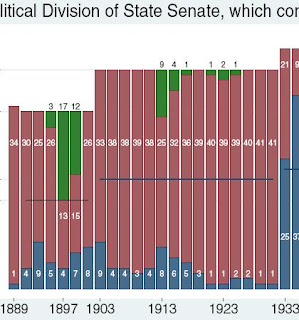 Political divisions in the state senate. Click for larger version.

The problem with the minor parties' argument that the Top Two primary hurts their chances is that a minor party candidate hasn't been elected to the state legislature since the 1920s. While you could blame that on the original primary system, that system still advanced one member of each party to the general ballot, which is what they're complaining the Top Two doesn't necessarily do.

What changed in the 1920s to hurt minor parties was the designation by the state of "minor and major" parties. Because major parties get the gift of state paid for organizational elections (PCO elections) every two years, they have a built in grass roots advantage over minor parties.

There's easy access to the machinery of major parties through becoming a PCO, and because they're required by state law, most legislative districts and counties have local major party organizations. Minor parties, not so much.

It would be better for the minor party folks to worry less about getting candidates to a November ballot where they're going to lose anyway, and worry more about the structural and organizational benefits major parties enjoy.

Effect of top 2 primary is that primaries no longer serve political parties. So . . . the primary now has virtually no useful function and should simply be abolished.

I would argue that the function of the primary isn't as a primary any more, but as a preliminary election before the general. It certainly isn't a primary in the traditional sense.

It pretty much serves the same purpose as an IRV election would. Though, the IRV would be an immediate winnowing, rather than one three or so months before the general.