Olympia is a city, a community, not a metonymic device 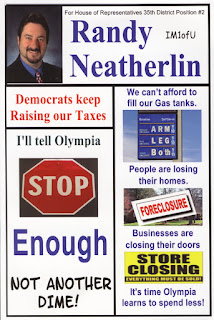 Randy says that Olympia is to blame. Well, not literally "Olympia," as in the city I live in, but rather the place as it represents some other out there for citizens in the 35th LD.

Yes, I understand the point of metonymy: the press is not literally a printing press, but the news media in general.

But, in the case of using smaller city state capitols to signify "state government" is wrong. It lets voters off the hook for the decisions they make, who they decide to sent to Olympia during the legislative session to represent them. It isn't Olympia's fault, its your fault.

In this way, even the Don't Let Seattle Steal This Election is more accurate than blaming your troubles on Olympia, because it is literally urban King County voters trumping rural conservative voters.

You've undoubtedly heard gubernatorial candidate Dino Rossi saying that he's wants to change the culture of Olympia. What is that culture? Does it need changing? If there is corruption, what kind? We take a look at the culture of our state capitol. What is true? What isn't?

There's a problem in the way that we talk about state government, because its not the culture of Olympia that's the problem, its the culture every legislative district that elects representatives to the state legislature.
Posted by Emmett at 10/27/2008 02:14:00 PM