Who will replace Bob Macleod 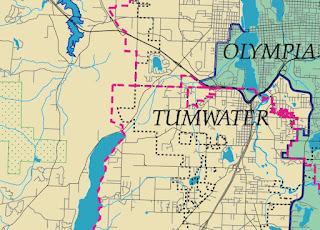 From what I know, no one has formally put their name forward for Macleod's seat. But, there's a lot of talk going on out there, so here's my effort to distill all that I've heard in terms of who could be going for it.

She's very likely to file. The only thing I can say is that she's only been on Tumwater City Council for less than a year, not necessarily a bad thing, but that's a pretty quick step from council to commission.

You'll soon get the feeling that being on the Tumwater City Council qualifies you for this position somehow. Geography just worked out, I guess.

Karen is a pretty long serving city council-member that I've never heard anyone speak ill of. She's also very good at helping out when other folks decide they want to run for office. If she files, she'd probably end up on the list of three.

She's also likely to file. I don't know Susan, I'm sure she's great. But, there's something that feels wrong about a staffer stepping forward at this point.

I guess that reveals my main prejudice about this process. I want to vote for someone who has already run for elected office and served, hopefully for awhile. Being knowledgeable about the particular position and the issues isn't necessarily a good thing to be, because of the danger of built in biases. Someone (like a city council member) with elected experience, who already knows how to be a candidate and has served on a board and that already participates in regional processes (we got those 'round here) would be the kind of person I'm looking for.

Brendan is stepping down in his own right, having decided not to run for the legislature again in two years. And, in the mean time, Tim Sheldon proved there's no legal problem with being in the state legislature and a county commissioner at the same time. And, while Sheldon is doing it from Shelton and Olympia, Brendan would be doing it all from Olympia.

Another bonus for Brendan. He replaced Sandra Romero, one of the county commissioners that will decide on the replacement, in the legislature. She also endorsed him in a crowded primary for her seat. Maybe not a shady backroom deal if he gets onto the commission, but you could say that Brendan and Sandra would work well together.

Not a name I came up with, I'm sure he's pretty smart about local government.

He's been a former mayor for awhile, so I guess geography puts him on the list. Since leaving he's been involved, very involved.

I like Jeff, but at the same time I'd hate to lose him from the city council. Or, if he tried to do both, lose his attention.

I heard back in the day when it wasn't known yet whether Macleod would run for a second term, that Russ was putting together a campaign committee for the position. Since then Bob stepped up, Russ stepped back and then Russ became a central part of the horror show that was the Olympia School Board for the last year or so.

Did resigning from the Olympia School Board taint Russ? I don't know, but I thought he was a pretty strong candidate two years ago and felt bad he didn't have the chance to run.

Right now, Neil is my top choice. I've heard good things about this work with the county housing task force. He's also the right mix of the person who has run for office before and has served well in regional boards.

The only knock I think that will hold up is his working against trying to keep Walmart out of Tumwater. Though, it seems, his approach there was to take the reality of Tumwater's fiscal condition into consideration. If he gets on the list, it will be because he was able to move past Walmart.

Like, you know, someone from Rochster/Grand Mound or Little Rock? These rural communities have the most per capita interest in who actually gets this seat, but I haven't heard of anyone put forward that could say they represent anywhere outside the urban core.