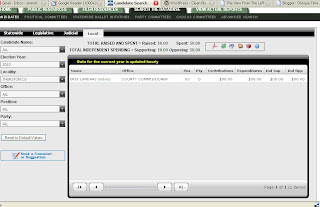 I had an inkling while perusing Ken's latest post on Erik Landaas (the Republican donor asking Democrats for a job) that this guy, no matter what the PCOs and the commissioners decide in the next few weeks, that he was running.

I was right, Landaas has filed with the PDC to run for the soon to be open county commission seat in 2010.

1. Assuming Landaas can raise any sort of money to even be competative, he can cut a moderate (you could even say Jon Halvorson-esque) track against whoever ends up at the other end of the application process.

He can say he's not the candidate of the party organization. Halvorson's opponent for a county commission seat won the party's endorsement in a close race. Of course, she ended up taking that endorsement all the way to victory, but Halvorson didn't make it through the primary.

2. Assuming the Top Two primary is still around in two years, Landaas can still run as a Democrat, and if everything breaks right, he can face off against a fellow Dem in the general.

3. The Republicans can save themselves a lot of grief by getting out of the way. While the local conservatives liked Halvorson a bit (kind blogging here, but not an endorsement, from the current county Republican chair), the Top Two primary still produced one Republican and one Democrat. By not running a Republican and letting Landaas soak up their votes, he can be dangerous for whoever ends up with the seat via application.
Posted by Emmett at 12/29/2008 08:12:00 PM

Well, Landass is not technically running until he files as a candidate in June of 2010. The PDC filing just means he's allowed to raise money -- and judging from the screen shot, he's not exactly sprinting out of the starting gate.

But you're right that Commissioner District 3 could potentially put two Democrats into the "top 2" primary. Halvorson only missed the General Election by a few hundred votes, and the West end of the County is much more liberal than the East.

That being said, our current batch of applicants doesn't feature any candidate with the resume or name recognition that Halvorson or Romero brought to the table. I think it would be a stretch to compare Landass to Halvorson.