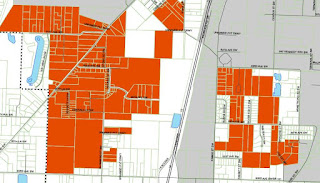 The Trent at EFF makes the development moratoriums we've been going through around here sound like a local government government sitting on top of any sort of progress across the entire county.

Of course, the actual truth is a bit more complicated than that.

He also ignores the several times since 2005 that the county commission has released properties from the moratorium. This you could find out if you follow the link Trent offers:

October 17, 2005 – Board of County Commissioners released pockets of unincorporated land that are within the city limits of Olympia and Tumwater from the moratorium on subdivisions.

January 31, 2006 – The Board of County Commissioners extended the moratorium on residential subdivisions for 6 months. The following were released from the moratorium: 1) Subdivisions that do not create lots less than 20 acres in size; and 2) Divisions of land which do not create any additional building sites because two or more single- or multiple family homes (not mobile homes or family member units) are already located on the parcel, consistent with Section 18.04.052 of the Thurston County Code.

January 13, 2009 ... The Board adopted Ordinance No. 14187 to renew the subdivision moratorium for another six months. This ordinance released a number of properties from the moratorium, and provided a method to be released from the moratorium if it can be demonstrated that the reason for the moratorium no longer exists. Please see the map under the section “Lands Subject to the Moratorium.

Trent also ignores the problem that is presented if you allow growth in the areas still included in the moratorium. Just like the properties above, the moratorium areas but up against a city in northern Thurston County, but are still in the county.

They represent baby "invisible cities," urban and suburban "communities" like Tanglewild and Thompson Place that were allowed to grow and develop in a pre-GMA Washington. Thurston County's own invisible city grew from the mid 50s until the early 80s and has filled in since then. Since growth management, it hasn't been annexed into an existing city or become a city on its own. It remains an urban and suburban collection of neighborhoods that is governed by a rural form of government.

Because it demands a higher level of service than a real rural county, it is sucking the county government dry. Preventing the rise of more invisible cities is just good management.
Posted by Emmett at 4/19/2009 10:04:00 PM

Email ThisBlogThis!Share to TwitterShare to FacebookShare to Pinterest
Labels: other blogs, Thurston County