Thurston County is Obama County (and what it means) 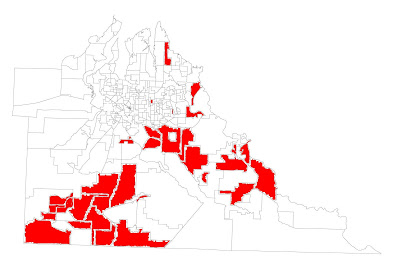 John McCain only won 31 of the nearly 300 precincts in Thurston County.

1. The Republican ticket won just two precincts in urban northern Thurston County, one in Lacey and one in Tumwater. Those should be written off because between the two, McCain/Palin netted just over 50 votes, they were tiny precincts. Democrats rock urban Thurston County.

2. While Republicans dominated in the south eastern portion of Thurston County, their rural dominance isn't repeated everywhere. The most lacking area is the northeast section, or the Thurston County portion of the 35th LD. Which is a major part of the newly interesting 3rd Thurston County Commissioner district.

3. That said, given all the red around Rochester, if a Republican can unseat a Democrat in that commissioner district, it will be from the south up.

4. In the east of Thurston County, I was surprised by how well the top of the Republican ticket did in an around Yelm. That might help explain how Randi Becker upset the lone elected Dem in the 2nd LD out there. Might also be a warning to newly elected Democratic county commissioner Sandra Romero. If the Republicans take that race seriously and put up one of their own that actually has a chance (instead of getting behind the least bad Democrat), they might have a chance out there.
Posted by Emmett at 5/11/2009 03:48:00 PM