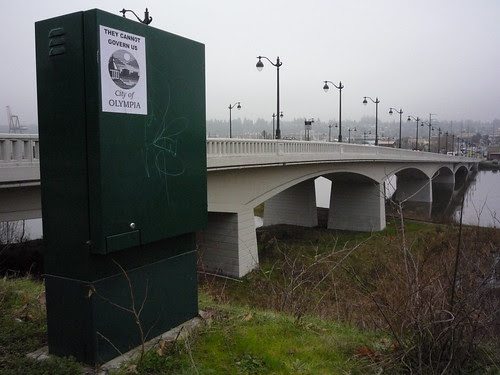 I'm technically violating the rules over at facebook by pointing this out, but someone tore down Tony Sermonti's billboard Thursday night. From what the Sermonti posted up on his account last night, the police are investigating.
This is the latest in the trail of ugly politics in Olympia. Since 2004 I've heard stories from Republican and more conservative friends of mine of blatant and repeated vandalism across town. Several times, a friend of mine has had graffiti cleaned off his truck, replaced a George W. Bush sticker and ended up having a window broken out.
And, there are the things that happened to Jeff Kingsbury last year.
I'll be blunt, I'm not going to vote for Tony Sermonti. But, the people who do this sort of thing are cowards and are the worst part of Olympia.
You Suck.
Which gets me to the point of a post that I've been meaning to write since I started noticed those "they can't govern us" posters around town last February or so. The sentiment in those posters, the same that tore down Tony's billboard this week, is the same that infects the so-called Tea Baggers.
When your government does things (moves to try to universalize health care or allow a tall building downtown), and you end up rejecting (you aren't my government anymore) the validity of that government, you're just running off into anarchy.
I'm not trying to use anarchy as a pejorative, but rather what I assume to be its true meaning, that universal government, for everyone by everyone, is not valid.
That may be a useful political point of view, and not one that I have a lot to argue about with, but when that philosophy starts to excuse violence, that's when I have a problem. And, to be blunt again, we've allowed this sort of thing in Olympia for way to long. I don't know how exactly we can go about stopping it, but we should.
Posted by Emmett at 10/10/2009 10:02:00 AM