I redraw your congressional districts so you don't have to (Olympia is the center of the universe, no?)

I know I said I'd avoid politics on this blog from now on, but this really isn't politics as much as its playing around with cool maps. It all starts with this cool tool by Dave Bradlee that lets you manually redraw congressional lines. Its a bit clunky at first, but as soon as you get a handle on how it works, it is pretty awesome.

First, consensus is that Washington is getting an additional district after the census is done.  Dick Morrill up at the UW makes a pretty good argument that the new district would be centered on Olympia (hey, have to be happy about that, right?).

What he doesn't really do is show you how that Olympia-centric district would shift all the other districts around. So, after about an hour or so of tinkering, here's what I came up with. 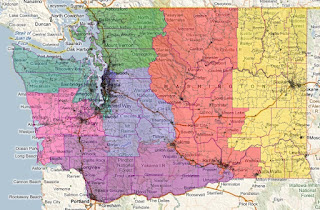 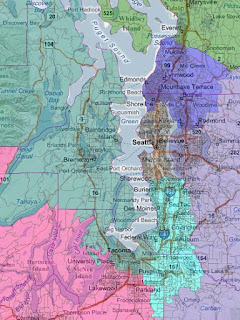 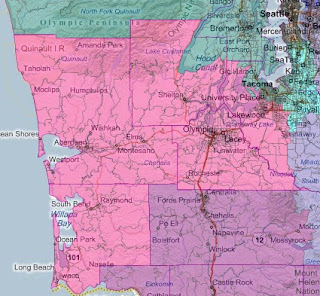 Where I fudged the most, between Yakima and the Tri-Cities, using the population out there to balance out three districts. 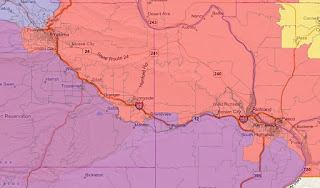 A handful of thoughts on the work the redistricting commission has to undertake to actually redraw the districts next year.
Also, the here's the actual file that you can upload to the tool above to really see the detail of the work I did. Its certainly not perfect, there are some unassigned areas still and likely some islands.
1. Morrill understates the impact the new district will have on the west side of the state. I used up all of Mason, Grays and Pacific counties, including all of Thurston and a lot of Pierce to get the new district.
I did take his advice and moved the 3rd across the Cascade Curtain towards Yakima and the Tri-Cities. But, I didn't really need to take up much of those urban areas to balance out the 3rd.
The real impact came when I started balancing out impacts to the 6th and 9th made by the new 10th. I made up most of those eventually with the 8th, which in turn I made up by again crossing the Cascade Curtain into the Cle Elum and Ellensburg areas.
2. So, in the end, I solidified Republican seats in the 8th and 3rd by crossing over the cascades. Both east side districts were way over, so taking from them was easy. But, what I'm not sure of is whether a Washington congressional district has ever crossed the Cascades.
Will having two members of the federal caucus working for both sides of the Cascade Curtain help bring that division down?

3. On the other hand, I think I created a pretty safe Democratic 10th. Even though it seems pretty rural, except for Pierce and Thurston counties, the three rural counties mostly elect Democrats to the state legislature.

4. And, yes, I balanced this out by playing fast and loose with the area between Yakima and the Tri-Cities. Since I have the 9th CD currently breathing down my neck a few miles away, I don't feel too bad about the crowded Interstate 82 corridor.
Posted by Emmett at 11/30/2010 09:34:00 PM

Funny that you say right in the beginning, that you dont want to talk about politics, cause that's exactly what I was thinking whei read your link on FACEBOOK... Oh no, not politics again... Heheheh

The Olympia Library has a book in their reference collection on the history of congressional districts, so I'm going to have to read that.