Green River Pop has been around for years, and its one of those kid memories I have that I try to make my way back to. Usually I can find it in a random gas station, but for the past ten years, its been harder and harder to find.


There’s an old/new item on the menu at the Bair Bistro in Steilacoom.

It’s called “Green River” (not to be confused with the coffee-colored liquid that meanders through Auburn), and the refreshing, green beverage conjures up a bit of nostalgia for those who remember “the good old days.”

A few days before Christmas, a handful of regular customers had an opportunity to taste-test this old-fashioned liquid while Bistro proprietor Sarah Cannon experimented with the recipe to replicate the perfect “Green River.”

After several patrons had sampled the mixture, Jane Bair Light, granddaughter of Bair Store founder, W. L. Bair, added her straw into the sample blend…sipped deeply, paused …and pronounced, “no, it needs a bit more syrup.”

The syrup/soda proportions, Cannon vowed, will be perfected by the time patrons flock to the Steilacoom Historical Museum’s “Living Museum” to order the renowned soda fountain drink.

Here is my photographic evidence. One with the carbonated water and syrup before mixing. 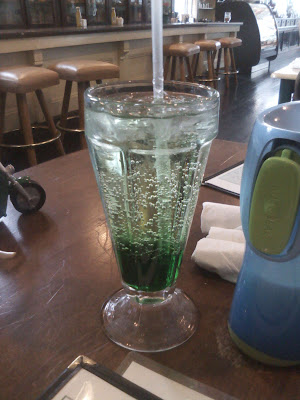 And, one immediately after. 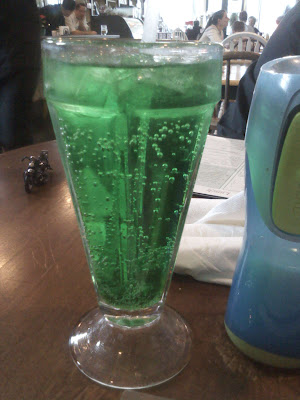 When we arrived, we were informed that they were out of C02, so my Green River pop had to be mixed with regular soda water. My overall impression is that in terms of taste its very close to what Green River tastes like out of a bottle, possibly just a little less sugary.

And, of course Green River (soft drink) has a wikipedia entry.