In preparation for later tonight, some metonymy of Olympia tweets

Its getting to be that time of year when the metonymy returns to Olympia.

And, if you were wondering, down below where I reply to a tweet about a post by Sarah Schacht about the budget bill over the weekend and how it appeared out nowhere? That post is simply brilliant. Sarah's exactly the right type of person we need blogging, her stuff certainly needs more attention.

And, my little snarky exchange with her is exactly the reason why I sometimes go overboard caring about how people use the term "Olympia." Christ almighty, Emmett, get some perspective. There are bigger fish to fry, you know?

emettoconnell: @mlas seeds of revolt just in Olympia or across the entire state of Washington? I'm confused #metonymy 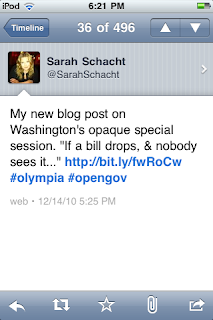 emmettoconnell: @SarahSchacht no offense but don't peg #Olympia for a lack of sunshine in Washington state govt #metonymy

SarahSchacht: @emmettoconnell I don't think you read my blog post; I documented a lack of public access to the budget bill, not transparency across WA.

emmettoconnell: @SarahSchacht I did, great post, I was replying to an earlier tweet of yours in which you used #Olympia in a metonymic fashion

emmettoconnell: @PNWLocalNews how about a hashtag for state politics that isn't about just one town? #metonymy

Oooooh. Now I get what you were talking about. I tagged #olympia not because I was suggesting the place means all Washington politics, but because many people watch the town they're in as a hashtag, and those that do, likely live/work in Olympia or in the capitol. I try to target groups of tweet watchers with my tags. Sorry for the confusion, and thanks for the kudos!