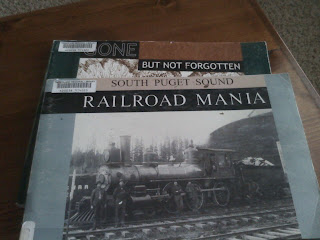 Olympic Outfitters was a Union Pacific station and the site of the famous runaway train.
http://www.historylink.org/index.cfm?DisplayPage=pf_output.cfm&file_id=7929

BLAMO!That's a great article, thanks for sharing Andrew. Here's a quote from a city of Olympia historic flier:

"The Union Pacific eventually extended service to Olympia and
completed the depot which is still extant although remodeled on
East 4
th
Avenue. The depot was the terminus of the Olympia Branch
of the Union Pacific which came from East Olympia, (originally
Chambers Prairie Station) across a 7. 4 mile spur to Olympia. The
line was completed in l9l5 by the Olympia Terminal Railway and
deeded to the Oregon-Washington Railway and Navigation
Company the same year. It was later deeded to the Union Pacific
system."

Couldn't find a thing on the old depot yesterday, now tons of stuff.