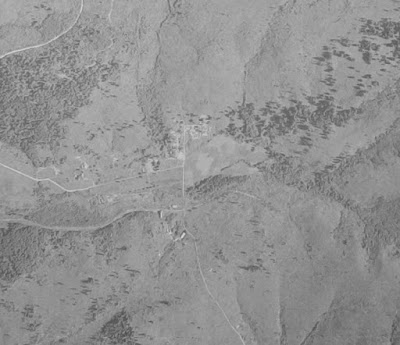 Great article & what a fun adventure.

Well done, Emmett. I would like to share this with the Secretary of State Historical Records Committee.

Thanks Chad and Sam!

I'm hoping to be able to go back soon and take a quick hike around. Just from the photos I was able to play with today, seems like nothing at all is left.

But, would be interesting to see what there is to see.

Just in case someone wonders, the original aerial I put up with this post was of Bucodo circa 1941, not Tono. I made the mistake because it was published upside down by USGS, throwing me off.

I had double checked it with Bucoda to be sure, but it being upside down and some features seemingly perfectly matching up with the Tono site, I assumed the best.

I have it all figured out now, I'll post new aerials soon.

Children picking up our bones
Will never know that these were once
As quick as foxes on the hill;

And that in autumn, when the grapes
Made sharp air sharper by their smell
These had a being, breathing frost;

(The opening of Wallace Stevens' "Postcard from a Volcano")

Back in 1974 my 4th grade class (we were a 4th/5th combination class)from John Rogers Elementary in Olympia made a trip to the coal mine in Centralia. in the middle of that afternoon the bus took us to Tono. Even then, there was just a single house (still occupied at the time...this must have been one of the last years the Hevaldas were still living there)and a sign. I remember being fascinated as a 10 year old boy that a town could just disappear and how cool it was that this little remnant of the past was still there. I could have sworn at the time they told us that the house was occupied by 2 elderly sisters, but from what I've seen online it must have been Mr. and Mrs. Hevalda. That little stop made a huge impression...I'm 50 now and still think about it! Tony

Where is the rest of the photos? They have been removed =(