Last year, the Thurston County League of Women Voters updated their historic study on county-wide governance and made the case for a more responsive and financially stable county government through a home rule charter. The study is worth the read, by the way.

More recently, a group formed around the league started getting together to talk about the possibility of a home rule charter campaign. Here are the notes from their April meeting. While the notes indicate they were meeting again, no other meeting notes or notices are available.

The local Sustainability Roundtable seems to involved, making some moves in this direction as well. Here is a proposed position paper on local governance, which builds off the effort by the league.

Here is a version of the notes above from the April meeting, but with more references on the back end.

Here is where the roundtable will be putting their sustainable governance information.

So, it seems there is a new born effort between the League of Women Voters and the Sustainable Roundtable to create a home rule campaign. Nothing since the April meeting has happened, but I'm still poking around, seeing what I can find.
Posted by Emmett at 6/15/2011 05:57:00 AM 1 comment: 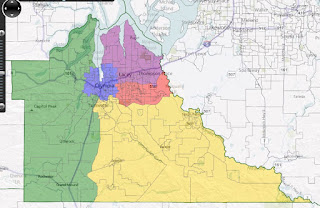 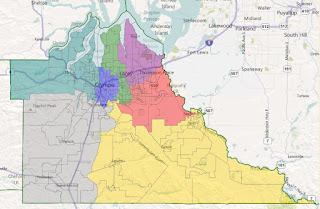 
So, in this option, you have three strong Democratic districts and then four which are balanced, with an equal number of those leaning Democratic or Republican. So, in a "Republicans do everything right" scenario, you could have a 4-3 advantage on a county council. On the other hand, in a Democrats do everything right, you have a 6-1 or 7-0 advantage.
I made a couple of assumptions that could be played with with these maps:
Either way, both scenarios show how creating more representation on the county level (more than our three current commissioners), you dilute the Democratic influence across the county. If STOP Thurston (arguably the most vibrant county level conservative movement in a decade) worked on governance issues, they could change the rules to make it more likely they could change the rules.
Posted by Emmett at 6/15/2011 05:44:00 AM 2 comments: 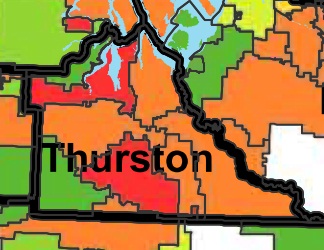 The old wetlands below the brewery (Unpacking the Olympia Brewery Visioning, Part 2)

This image, from the Washington State Historical Society, shows an obvious wetland in the lower right hand corner.

From the current layout of the brewery, this is where most of the warehouses constructed in the post World War II era of the plant are located. These are obviously the most recent additions, and geographically, the most expansive.

So, what I've been wondering is, since we know what was there pretty recently, what do we do with the area? Is it a good place to restore? Do we focus our commercial restoration on the old brewhouse and pre-World War II structures on the bluff on the northwest side of Capitol Way? Or, since this is a large flat area that's already been developed, do we right it off?
Posted by Emmett at 6/02/2011 06:23:00 AM No comments: