1. A blogger comes to Olympia, visits friend, enjoys self, spends money downtown. Please, visitor and business folks, peruse this post and look for clues to get more people to Olympia to spend money.

2. Then this other blogger comes to Olympia, walks around, entertains himself with portable technology and doesn't buy a damn thing. What's his problem? Again, visitor and business sector folk, please look for clues to why this guy didn't spend any money.

3. And, the plumpalate reminds us that this really is the time of year for shellfish. The Oyster Light season is quickly coming to a close, so before the sun starts shining too much and the water is too warm, get yourself some bivalves. From plumpalate:


Something spontaneously good may worm its way forward and that’s when you snatch it up. That’s what happened at Olympia Seafood last week. I went in to get last week’s smoked salmon and came out with something else besides. Something slightly intimidating: mussels and clams. I’d never made shellfish before. But Tony, the owner, told me these were collected that very morning at Totten Inlet. This was not a moment to resist.

So I didn’t know what I was doing. But the recipe he gave me sounded so easy, I thought I couldn’t mess it up.

4. Its probably worth the effort to watch Walt Jorgenson's videos (one, two and three) of the SPEECH media roundtable last week. I watched mostly through the intros, then got distracted. Hopefully, I'll pick it back up in a few days.
Posted by Emmett at 3/31/2012 01:35:00 PM 1 comment:

At the risk of being a boring hater (book fight roundup!)

I pointed a week or so back that a new book was coming out that had the name "Olympia" in the title, which always gets me excited. Turns out there is a lot more to this story than what I first saw.

First, here's a podcast I listened to earlier this week in which Andras Jones, the author of "Accidental Initiations: In The Kabbalistic Tree of Olympia" explains the story behind the book.

Merywn Haskett, who plays a part in the book and took one for the team writes his review: A Narcissistic Misogynist with a Persecution Complex.


The book goes back and forth between Kabbalistic mumbo-jumbo, and an autobiography where he never admits fault, where he gets bullied or fired everywhere he goes (which, apparently, is why he doesn’t make movies anymore) and where his fear and/or hatred of women is probably the most honest thing he writes. He idolizes his deceased father, a college professor who had numerous affairs with his students.

Merwyn (check) not a fan. By the way, it is worth looking at the responses to Merywn's review, which he cross-posted to Amazon.

So, then Jones posts up a response to Haskett's review on his own blog. The post is frustratingly titled: A Narcissistic Misogynist with a Persecution Complex. Come on guys, someone pick a new blog post title.


Don’t get me wrong. I would still like to punch him in the face. I just don’t allow myself to gnaw on that particular brain bone for very long before breathing it out.

Not a breakout of a mutual appreciation club by any means.

And then, Haskett's counter, yet to be title "I wear women's glases."

At the bottom, this sounds like a very personal fight between a handful of folks, which is becoming more public because one of them wrote a book and two of them have blogs.

But, not to ignore the fight (other than pointing it out, I have nothing really of substance to say about it), but here are a few independent thoughts about the book.

1. Isn't it interesting, how the cover seems to stretch the Olympia brand?

2. Part of the book seems to deal with a tree in Sylvester Park that holds some significance. According to Jones, Olympia has been shaped to intensify this significance. At one point in the podcast, he seemed to imply that there could be a secret movement of city fathers to make these changes happen, specifically inside Sylvester Park. He commented something along the lines of "if I was on the city council," implying it was the city making the changes.

Of course, Sylvester is a state park, so depending on your perspective, making the force behind the changes more vast and creepy.

3. Also, the idea of a shadow history and geography of the city is sort of fascinating. Not that my fascination has any bearing on the argument above or calling people "boring haters."
Posted by Emmett at 3/28/2012 08:00:00 PM 1 comment:

2. Speaking of books (lots of books last week), Wolf Tales blog has a new book too!


The OPC, just like the other groups I mentioned, does impact our lives, though those impacts aren’t often apparent to the casual and sometimes even dedicated observer. Even when one is interested in the instrumentalities of community governance, there is a huge learning curve. Thus, the job of someone writing about a planning commission as a piece of the larger context is exceedingly difficult, but that is a challenge I intend to undertake. As you’ve seen by now, I’m interested in the theory as well as its applications and I’m not sure exactly where we’ll end up. At least we can take pleasure in the knowledge thatinterminable deliberations like the SMP have not dissuaded me from moving on to subjects of interest in the meantime.


4. Bike hut at the westside co-op. Thank goodness this hut isn't replacing a patch of grass or dirt, because the westside would have a problem with that. 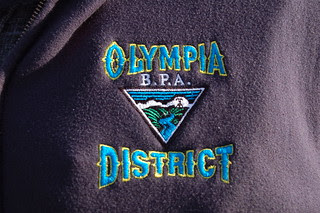 (Note from March 13, 9:52 pm: Just found this laying as a draft, though I swear I set it to publish over a week ago. Damn blogger.com)

2. And, another book: "9 ways to sock a fish" via Calavara.com. Literally a book in just over a day. Go to the link and figure out how to buy it.

3. And, speaking of things being made, Oly-Mega looks like its working on getting an hacker space up and running in town.

4. As Mathias said, that didn't take long for someone (in this case Rob Richards) to be disappointed in the city council.

5. And, because I have a thing for this particular train line, a train through the old brewery:

Tragedy and the possible politics of WA10

Between PTSD, a standoff, burning, murder, a rampage in Afghanistan and now this crazy hit-man going to blow up the capitol story, Joint Base Lewis McChord has had a better few weeks.

At the very least, the base and the community that is around it is feeling the strain of over a decade of deployments. So, our new congressional district will be centered on the communities around JBLM. Don't you think these new stories would wrap up into some sort of narrative of how this new district relates to the federal government?

So far, two of the three candidates have soft language on the website talking about veterans, but nothing too specific or strong as far as I can tell.


Congress needs to ensure these heroes and their families get the medical and educational support they need to transition successfully back into civilian life.

He’s seen firsthand the impact that long deployments overseas have on our fighting men and women and their families
...
There are brave men and women that fight daily to preserve the freedoms that we, in America, enjoy. For that, they deserve the honor and respect they are due. We must ensure they have access to proper benefits for themselves and their families, never worrying if they are protected. Our veterans deserve nothing less.

Despite being an Army veteran, only Stan Flemming doesn't seem to make some blanket "we need to help the vets" statement on his website.

Its ironic, that with the retirement of Norm Dicks, who is the ranking member on Defense Appropriations, Washington State will lose one of its most powerful voices in this venue. Dicks has already brought up PTSD back east.