From things I don't get to things I really like (Olyblogosphere roundup for October 13, 2012)

1. I don't get the bead thing and I don't get decorating skulls. Though, I suppose its a thing for Halloween. That said, Shipwreck Beads must be the capital of things I don't get.

4. This is the sort of thing I do this link roundup for, Janine's recent writing on the county commissioner race is the best things out there right now on local politics.
Posted by Emmett at 10/13/2012 02:00:00 PM No comments:

The Pig War and Olympia baseball


I'm working on something longer about Olympia baseball, this is a portion of that longer thing.

Olympia's baseball history probably starts just a bit earlier than than the summer of 1872. Baseball clubs had exploded between Vancouver and Portland five years before, but the following in the first refernce I can find to a baseball team in Olympia (Blankenship):


Olympia, in early days, was not without its baseball team, in which it took great pride in the days of underhand pitching.  Several match games were played with Victoria, and Olympia was victor each time.  The English knew more of their national game of cricket, and had not perfected themselves in America's favorite sport.  About the time these games were being played the matter of the San Juan controversy was on, involving Uncle Sam and Great Britain.  The dispute was in the hands of Emperor William of Germany for arbitration.  On the day the first game was to be played there was conspicuously posted at the post office a telegram in proper form on a Western Union blank, reading as follows:

Governor Washington Territory:
Emperor William, having in hand the matter of the San Juan controversy, has concluded to base his decision on the result of the baseball contest between Olympia and Victoria.

Thus inspired the Olympia boys went in and won.  It is barely possible that the illustrious grandsire of a degenerate grandson never heard of the game, but the victorious Olympians came from the field with breasts distended like pouter pigeons, plainly conscious of having won an empire for their Uncle.

Just a bit of background, the maritime border between Canada and the states at this point had not been set. Both sides claimed the San Juan Islands, and at some point someone shot someone else's pig. And, both British and American soldiers were based on the San Juans. Hence a war with only one casualty.

So, the game would have been in the summer of 1872. The German led committee set to settle the Pig War made their decision in October 1872, the British withdrew a month later.

It was also at the exact same time that the mysterious Ira B. Thomas was in town, buying land for a possible terminus for the Northern Pacific railway. Its almost odd that the fact real world wager for this game was over the San Juans and not the terminus. It would've been just as believable (maybe more believable) if the game was to be played against Port Townsend or Seattle and the prize was the Northern Pacific terminus.

But, of course the opponent was the opposite capital and the prize was the lonely old San Juans, almost a footnote to history compared to the terminus.

These were the days of formal invitations sent between clubs. And, clubs were not synonims for teams or businesses in the economic venture of making money from sport. They were actual clubs as in having elections and officers and bylaws.

Olympia base ball club would hold a meeting. Who do we invite? Let's invite Victoria! The next day, a telegraph is sent.

At their next meeting, Victoria considers the invitation and accepts.

Terms would be set, travel would be arranged and in a month or so, Victoria would travel down by steamer. This is the era before even leagues when a club (again, and actual club, as in an organization of men wanting to play baseball) would know before each season (such as spring, summer and fall) who they would play. No yearly champions, just invitations and games. But, they did keep score.

If you've ever read W.P. Kinsella, especially the Iowa Baseball Confederacy, you recognize the elements of a great baseball story here, if only the German challenge were true.

In the Kinsella-esque version, a German official would be on hand, because the game would really have been the deciding game in the Pig War. Ira Thomas would be there too. Thomas' wife back in New York state, unaware that her husband had but months to life.

Just for fun, even though the historian puts down a date of July 16, I'll put the game on July 4. That enhances the patriotic aura of the game.

Both the German official, maybe an American from the state Department and a British foreign office official come in on the same boat as Ira B. Thomas. The British official thinks the game is a joke, the American thinks its great and the German is just happpy they decided to settle the fight over empty islands somehow.

Ira B. Thomas has a secret, but can't talk enough about all the stuff he's heard about Olympia (but not really why he's there).

I'm not sure how the rest of the story unfolds, but obviously the game goes into extra innings. 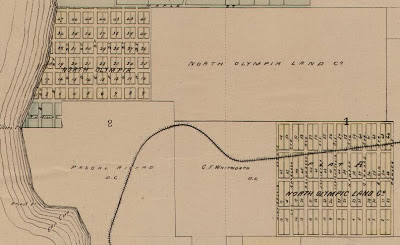 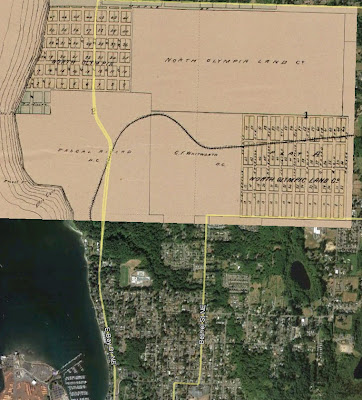 Secrets and vagueness (Olyblogosphere for October 1, 2012)

1. The Man With No Change at Old School:

2. Someone just had an 11 year blogiversary!

3. Alec Clayton talks about the books he's written and focuses on their autobiographical aspects:


There’s a reason these first three books were set in locales where I have lived and a reason that the main characters were all about my age. Both were to create a palpable sense of place and authenticity. Write what you know is the old axiom. I made the main characters my age so it would be easier to get facts right: getting the popular songs, books, movies at any given time right and ditto for hair styles, fashions and automobiles.

4.  Long video, featuring Steven Willis of Morty the Dog, on Comics at Evergreen: