A Swarner Communications arts and entertainment (and some news) publication folds back into the mothership, as noted by Mathias:


The Weekly Volcano, a alternative newspaper serving the Tacoma, WA and the greater South Sound, including my little city Olympia, folded this week.

With the growth of the JBLM military base, it’ll be interesting to watch how our area will change over the next few years.

1. It isn't all that surprising that Swarner Communications (the owners of the Ranger and the Airlifter) folded the  Volcano back further into their main publications. They made the decision in 2009 to take what was the stand-alone Volcano and revert it back into an insert of their main publications. When the Volcano launched in 2001 as an insert, it was actually the re-branded Tacoma City Paper.

2. And, to say Joint Base Lewis McCord will grow is to be saying something true in 2000. JBLM has grown, and its influence has obviously grown (past tense) in Thurston County.

Just for reference, here's a map of the 33 minute driving distances from the JBLM main gate, which brings in much of north Thurston County. 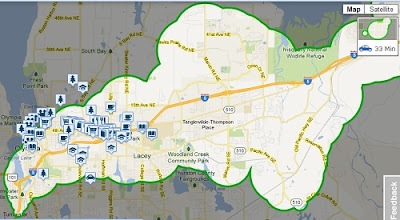 Here's also some old stuff where I point out at least our congressional political world will probably have a lot to do with JBLM politics. Our congressman's tour of post sequester life focused unsurprisingly on the impacts of federal spending cuts on the military.

But, when it comes to actual numbers, I'm not actually sure if JBLM has made that much of an impact on Thurston County. Here's my working spreadsheet and charts.

Sure, Thurston County is in the top five of above average counties in terms of percent of military population:

And, the Old Navy at the Capital Mall has a large sign announcing special 10 percent off for active duty military families. I'd use those facts and anecdote to say that we are already a military community, at least in part. And, the growth of the military population has been largely consistent, with no real drops since for over two decades.

But, in terms of real number, the military population in Thurston County is so small compared to that of Piece (28,000 to only 5,000). So, maybe I wouldn't be so brave as to say we're really a military county, but you'd have to recognize that JBLM's growth has been happening for a long time.

3. Extra bonus thought: yesterday I was driving through town (after I saw the Welcome Military Families sign at Old Navy) and was thinking of intersections between military folks and typical progressive Olympia folks. I could think of very few on the car ride. But here's one from Berd (who probably represents one extreme of the equation).

Berd (A story from the Peace Vigil):

I went to look at the fire that had broken out in the area of West Bay Marina, and struck up a conversation with an Army Ranger veteran who had toured Iraq and Afghanistan.

He was initially quite aggravated and offended by the sign I was carrying, but once I explained in my own words what I thought the sign meant, he was in complete agreement.