Much of Thurston County's landscape was shaped by glaciers, melting or otherwise. So, while the Mima Mounds may be cool, there are other totally awesome features that you should take notice of.

Some Kettles from Southeast Olympia (from Geodata): 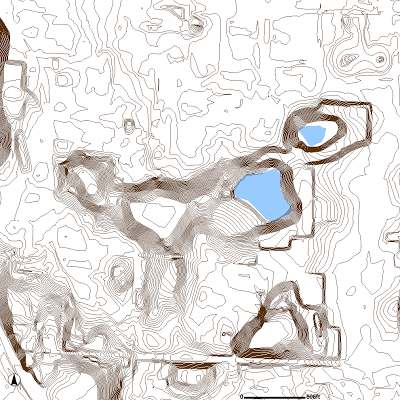 Can you imagine the block of ice that created Ward Lake?

2. So, in addition to dropping massive pieces of ice making massive holes in the ground, melting glaciers also created rivers that don't exist anymore. And, if you look closely, you can find out where these old river channels are. Probably the easiest to spot is Spurgeon Creek just south of Lacey.

You can see exactly what I'm talking about on Spurgeon Creek Road, just south of the intersection with Fox Ridge Lane. To the west, you can see the Spurgeon Creek valley. But modern Spurgeon Creek is much too small for its creek valley. After the last time glaciers retreated from here, they created a massive meltwater river that carved the valley, eventually meeting up with the glacier swollen Chehalis River.

This detail of this map show exactly how the water flowed in the ancient Spurgeon Creek. 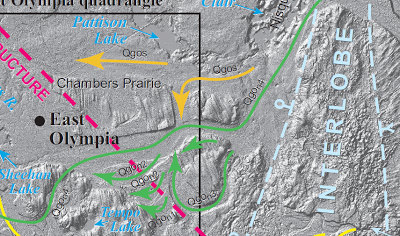 The Washington Landscape Blog has a great explanation of how these glacier meltwater rivers were different than today's:


One is the lower Chehalis occupies a valley that it did not carve. The Chehalis follows the former valley of a much larger river. During the maximum ice extent during the last glacial period melt water from the Puget lobe ice sheet drained to the ocean via what is now the Chehalis River. The river that carved that valley was a much bigger river than the Chehalis.

3. Lastly, there is at least one massive rock that was brought to Thurston County by a freaking massive sheet of ice. Glacial erratics are pretty awesome on their own, and there seems to be plenty in the Puget Sound area.

So, I don't know if it's just me, but I think it's pretty cool that we have one here.

The massive rock brought here by a sheet of ice is pretty far out of town on 153rd Avenue off of Vail Road.


And, here, as an extra special bonus is a tour of the three geologic features that are more awesome that Mima Mounds.

I think it is disrespectful. I think they are amazing and should be commented as though you honor Mother Earth and all her parts~.

I'd be proud again if you change that to reflect how awesome it All is :)

Its not cool to publicly defame part of Mother Earth. Do you understand?
Klahoya, wasichu.

Don't be upset, son, there is some great research and message in your work. I have seen the boulder at Yelm, and am always mystified by it. I know the story of how it came here, as well :). I would like to see you choose not to criticize to make a point, and instead be inclusive: 'Hey, guys, in addition to the Mima Mounds, here's More to the story!' or something like that. Don't harm to make a point, rather create the excitement for others that is in your heart.
~<3~

The land is an entity, please respect.

Please redo this blog to reflect your respect.

Sarcasm, Bill? The point surely is that the formations Are special. :) I ask for respect...

Great info. The Mima Mounds were not insulted Derrick. They have no means to receive a message. I like how he layer the entire story. Starting with 3 things more awesome e than the Mima Mounds. If you believe that the earth is alive in some religious sense, I get your point. You can't please everyone. Great job.