Hey, Kari, you don't know how right you are: Appalachia in Oregon. Of course, he's making the point that rural counties in Oregon are doing so poorly, they risk becoming like poor and poorly governed communities in Appalachia.

The funny thing is though, that these Cascadian communities share a heritage with our Appalachian cousins. In fact, Cascadia is a direct descendant of Appalachia, along with some New England Puritanism. In American Nations, Colin Woodward describes this way:


The coast blended the moral, intellectual, and utopian impulses of a Yankee elite with the self-sufficient individualism of its Appalachian and immigrant majority. The culture that formed—idealistic but individualistic—was unlike that of the gold-digging lands in the interior but very similar to those in western Oregon and Washington. It would take nearly a century for its people to recognize it, but it was a new regional culture, one that would ally with Yankeedom to change the federation.

In Olympia and Thurston County Washington (where I am most familiar) this molding together of two extremely divergent cultural traditions is seen early on. Arguably, the two most significant families in Tumwater (the first permanent non-tribal community on Puget Sound) represented both New England -- the family of Clanrick Crosby -- and greater Appalachia -- Michael Troutman Simmons.

A quick examination of the birth states named in the 1870 Thurston County census illustrates the strong mix between Appalachia and New Englanders.

New Englanders came to the Northwest with business on their mind, but came with traditions of religion, universal education and a general "for the good of all of us" attitude. Appalachians, as Woodward describes them, were nearly the opposite. While they also meant business, their social code was individualistic.

For example, while Simmons was one of the first to lay down roots in Tumwater, he moved on by the mid 1850s. It was up to the Crosby family to plat early Tumwater and incorporate the city. The Crosby clan would build Tumwater and Thurston County in a very real sense. Simmons would continue jumping from venture to venture. His most significant contribution to our heritage would end up being the secession from the Oregon Territory and a quixotic run for Congressional delegate as an independent in 1854.

How does this mix of New England organized capitalism mesh with Appalachian libertarianism in Cascadia? For one thing, as Woodward points out, eventually the religious portion of New Englandism is stripped out and replaced with another moral code. This time it is more humanistic, and comes in the form of environmentalism, human justice and peace movements.

Jarrett Walker's recent look-back piece on Ecotopia actually gives a good explanation of how this mix occurs. Even though Ecotopia is fantasy, it draws from some very real considerations of Cascadian politics and culture:


The most profound Ecotopian innovation, however, is the rule of the local. Taxes are paid to your town or region, which then forwards some of the revenue to the nation. Decisions are made as locally as possible, and all things giant – both corporations and governments – have been banned or minimized. The national government is small: a coordinator and inspirer rather than a ruler, making decisions only on the few things that must be done at national scale. National defense seems to be based mostly on bluffing, but the Second Amendment's "well-regulated militias" are a key part of it; people own guns for that purpose as well as for hunting. There are ideas here to excite a Tea Partier, not just an ecologist.

Ecotopians love competition but they want all companies to be worker-owned and no bigger than 300 employees. Government should not do anything that the private sector can do better with correct incentives, but they reach surprising conclusions about which functions are which. Mass transit, intercity and urban, is a government function because of the efficiency that arises from integrated networks and the need to manage big environmental impacts. Education, on the other hand, has been fully privatized into teacher-owned cooperative schools with tuition grants for low-income kids. Local schools compete vigorously for the parental dollar, with outcomes controlled by just a few standardized tests. Ecotopians figure out what works regardless of whether we would call their solution "liberal" or "conservative." Buzzwords rarely constrain their thinking, perhaps the most utopian of all their ideals.

"There are ideas here to excite a Tea Partier, not just an ecologist." In Ecotopia you find a drastic description of how the two divergent cultures come up with consistent political philosopy. Yet, not one that conforms with the right-left duopoly of the rest of the country.

Which is how you can explain the map below and these election results. 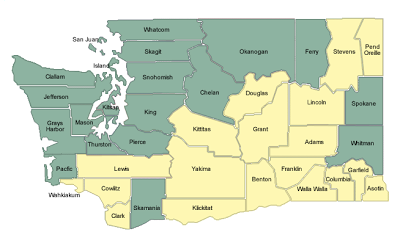 Marijuana legalization passes in Washington State, but not in the typical "win Puget Sound" way. It won in some odd places, such as Ferry and Mason counties. This counties drew from their libertarian Appalachian roots to vote for a law that would arguably be good for personal liberty

It is also why a state that consistently elects Democrats to statewide office also votes consistently to constrain taxes. And, we voted broadly to liberalize liquor sales.

At least two of these measures (marijuana and alcohol) find the sweet spot between liberalism that New England has become and libertarianism that we've important to Cascadia. While these results aren't a tidy political ruling philosophy written out in Ecotopia, they are at least tentpoles to show us where exactly our political heritage came from.
Posted by Emmett at 7/08/2013 06:19:00 AM

I'm a museum director in Oregon's Umpqua Valley. We moved here from North Carolina eight years ago. The surnames alone show the roots of which you speak. Thanks for the great article!
Gardner
Douglas County Museum