Explaining better with maps and what are Cascadian politics? (Cascadia exists #4)

A few weeks ago, I wrote a post trying to connect how Appalachian and New England settlers have shaped Cascadia. I used a map to shortly show how some things (like legalizing marijuana) cuts across the usual political barriers in at least one part of Cascadia, Washington State.

Muto_krang on a reddit thread about the post questioned the conclusion I'd drawn, so I'll try to explain it a bit better here.

This is a fairly typical statewide result map for an election in Washington State: 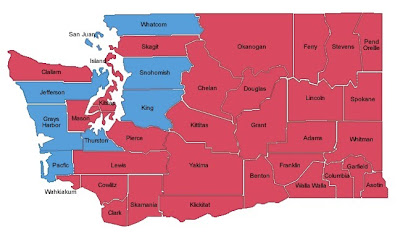 This is the 2012 governor's race. Most of the territory is red (Republican) except for the Puget Sound, where most people in the state live. You see the same pattern in the 2008 governor's race and the 2010 senate race.

Democrats win the urbanized Puget Sound and some traditional Democratic holdouts on the coast. Republicans win the rest. But, this is only when the race follows traditional (and typically national) lines of debate. Republican and Democratic candidates in Washington typically discuss things like taxes and abortion, things that the different parties argue about everywhere.

But, when the debate becomes about something neither party really lays claim to (say marijuana) we can see the real regional personality of our Cascadian politics come through. And, that is where you get a map like this: 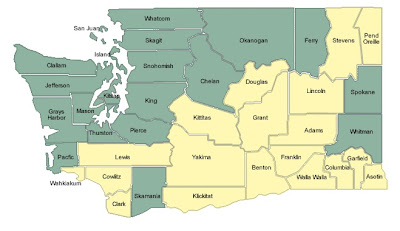 You still have the traditional liberal base of Puget Sound voting to legalize marijuana, as you would expect. Even borderline liberal counties like Pierce County join in.

But then the political spectrum loops all the way around and the libertarian (from our Appalachian roots) comes around and holds hands. Places like Ferry, Skamania and Clallam counties (which don't often vote for Democratic candidates) each voted the saem way King and Thurston County.

So, that is what I meant when I said " In (Cascadia) you find a drastic description of how the two divergent cultures come up with consistent political philosophy." In this case, when you ask the question that neither party is asking (should we legalize marijuana) you find a geographically diverse majority in favor of it.

My next question is, what are these legalizing marijuana like questions that we aren't asking that can be answered with a Cascadian political philosophy?