One thing that bugged me about some of the comments from the Cascadia Calm post was the treatment of some regional personalities as normal, while others abnormal. But, Kim brings up Southern Charm indirectly, so I'll take a look at Southern Charm.

The idea behind Southern Charm as the polite normal is pretty straight forward. As Kim points out, Southerners (especially Dixie Southerners) introduce themselves, use terms like sir and ma'am, make polite conversation and share stories about their lives, relations and friends.

Now, if someone (without a Southern accent) came up to me and started behaving this way, I'd be just a bit put off. But, that's me, that's my region, that's how we see politeness.

But, let's get back to Southern Charm and its origins. Or, at least its dark side:

Southern hospitality is all it’s chalked up to be: It’s 12-molar, 190-proof distilled essence of welcome, and aren’t you sweet? But at the restaurant where you can’t leave until they bring you a bill, and they won’t bring it until they’re good and done with you, it’s about control, not welcome. It’s a little bit more like Grandma’s insistence on red velvet cake and seven-layer cake and chocolate cake after Sunday dinner — but everybody has to make one and bring it, and don’t even think about getting up from the table until you’ve tried all three, and, meanwhile, greens turn to glop on the stove and dressing dries out in the oven and Grandma accidentally lays the potatoes down on the settee, a case of nerves brought on by the strain of all these guests that she demanded come over. I have endured this kind of hospitality in the family of my beloved wife, a native of this state, and I have seen the toll it takes on host and guest alike. “A tyrannical Southern insistence on hospitality” is how David Denby described it in a recent New Yorker review. “Graciousness,” he concluded, “is both armor and a weapon.”

Why does the South, in particular, need this sort of personality to survive. It is because, Huler notes, of the way the South developed:


In A History of the South, Francis Butler Simkins and Charles Pierce Roland say “the cult of Southern hospitality” expressed “a means of relieving the loneliness of those living far from each other.” A new friend once pressed hospitality on me on Malta, the island at the belly button of the Mediterranean. When I suggested I could not possibly be as welcome a guest as he made me seem, he explained: “We live on an island. We wait for people like you.” Loneliness powerfully motivates hospitality. On a more basic level, when it took half a day to get to the neighbors, you’d better get more than a ladle of water and a nod from the porch when you rode up.

Large farms, a largely rural population spread across several states. It is no wonder that the regional personality was focused on being so damn polite. If you weren't if you lost a few friends, they were likely the only friends you'd have a chance to make in awhile.

And, I'll just make the leap here to another topic that I think is pretty striking given this conversation. Take a look at the social capital map of the United States: 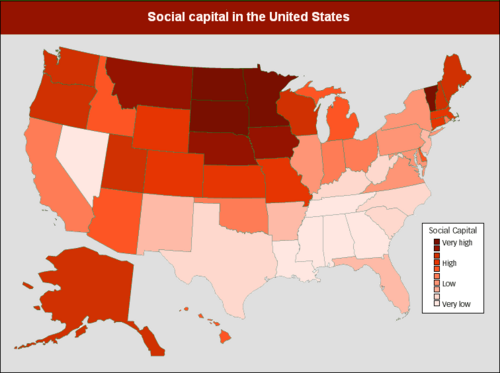 And, this quote from Democracy in America:

The more we descend towards the South, the less active does the business of the township or parish become; the number of magistrates, of functions, and of rights decreases; the population exercises a less immediate influence on affairs; town meetings are less frequent, and the subjects of debate less numerous. The power of the elected magistrate is augmented and that of the elector diminished, whilst the public spirit of the local communities is less awakened and less influential.

The map shows you that the De Tocqueville quote carries through to today. The institutions built up by citizens acting in concert with each other simply don't exist in the same ways that they exist elsewhere (especially New England, the upper Midwest and Cascadia).

If you don't think about it too hard, it seems strange that the region best known for its social graces rates the lowest in social capital, the actual verifiable ties that bind community's together.

Unless you thought that social politeness was a cover for actual social ties that bind. If you know you have support from your community, that things will go well because people are generally nice and will back you up, that your local government is there to help, I don't think you'll need to be overlly polite to everyone you meet.

But, if you lack social cohesion, the support groups and social capital just isn't there, you're region might develop an overly polite personality to make up for it.
Posted by Emmett at 8/29/2013 06:03:00 AM