If you live in Olympia, go take a look at your ballot. Looks pretty empty. There's only one raced listed on this summer's primary ballot in Olympia and that is for county auditor. The interesting part is that it really isn't a primary election, in the traditional sense, since only two candidates appear on the ballot. 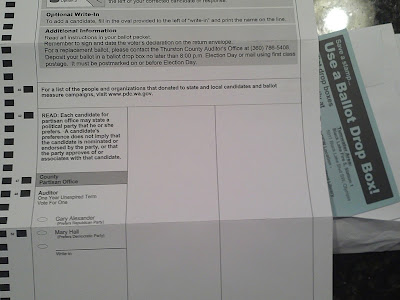 If not for a change in state law (embodied in HB 1195) that went into effect two months ago, the ballot sitting in your kitchen wouldn't be there. The legislature only changed the law this last session that requires a primary in the case of an election to fill a local partisan office "of an unexpired term in an odd-numbered year if no more than two candidates have filed for the office."

It makes perfect sense for there to be no primary if only two candidates are on the ballot, right? Well, not really, at least from the perspective of the legislature.

It is worth noting here that the election in this case, county auditor, is for the office that is responsible for executing the very law I'm writing about.

It is also worth noting that one candidate for county auditor (Republican Gary Alexander) serves in the legislature and on the committee in which this bill was originally considered. He voted against the bill to make this change when it was in committee, but voted for it when it was in the full house.

So anyway, why require a primary when it is essentially meaningless? Both candidates will be in the general election in November anyway, so why waste the money printing and counting ballots?

This exchange from a committee meeting gives you a good idea of the context of this kind of law.


Rep. Manweller: Could they raise two checks or would they be limited to just one?

Legislative staff: Under the current system (no primary needed) they would be limited to half, one $900 check, or whatever that is.

Manweller: So they would only have one election.

Staff: That's right. Under current law, under these circumstances. If the bill is changed, then they would have two elections.

So,  essentially, the only reason for the change in the law that's forcing Thurston County to print, mail and count extra meaningless ballots is so candidates can raise more money.
Posted by Emmett at 8/01/2013 06:16:00 AM