Why is it all named Puget Sound?

From George Vancouver's journal in 1792:


Thus by our joint efforts, we had completely explored every turning of this extensive inlet; and to commemorate Mr. Puget's exertions, the south extremity of it I named Puget's Sound.

Because Olympia, or rather what today we consider the suburbs of Olympia was first in western Washington, we call the entire inland sea in our region "Puget Sound."

Originally, at least at its naming, Puget Sound only stretched as far north as the Tacoma Narrows. At that point, the water bodies took on other names such as Admiralty Inlet. If the first non-Indian settlements might have been further north, we might be talking about Admiralty Inlet rather than Puget Sound.

It is likely that Vancouver himself thought the honor he gave to the British Admiralty more significant than naming a minor arm of the major water body after one of his officers.

But, the British Puget Sound Agricultural Company came about 40 years later and at Nisqually, settled on the shores of the contemporary and modern Puget Sound.

When the Americans came, all bets were off. The second newspaper in what would become the territorial capital blatantly advertised itself as being "on" Puget Sound. 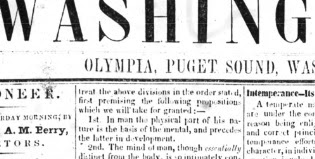 So, as American communities began to stretch north away from Oregon and Olympia, they move the Puget Sound name north with them, erasing past distinctions.


These settlements... were near the southern extremity of this inland sea -- the very portion which Vancouver named Puget's Sound. That name became the familiar one, ans as the white settlements moved northward along the shores that name carried along regardless of other names, like Admiralty Inlet, Port Gardner, the Gulf of Georgia and Strait of Juan De Fuca. Puget Sound became the generic name for the whole region and is largely so used in the present time.

Port Gardner was named for a British vice-admiral and Vancouver's patron and the Gulf of Georgia was for King George III. Both seem to outrank Lt. Peter Puget, hardworker he may be.

Huh. I had always thought of Puget Sound and the Straight of Juan de Fuca as distinct bodies of water. So does this mean the Hood Canal is also part of the Sound? Or even Bellingham Bay?