Evergreen should play more games not on campus 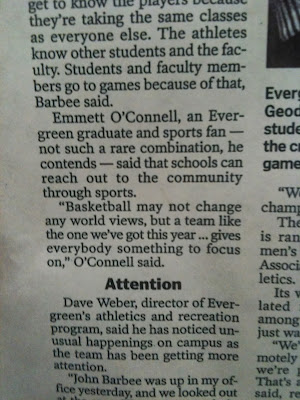 Here's on thing about Evergreen State College and Olympia that a recent resident here observed: You'd hardly think Olympia was a college town. Now, this guy is from the upper Midwest, went to the University of Wisconsin at Madison. So, maybe he has a different idea of what kind of college town Olympia could be. But, he mentioned Bellingham in the same breath, and I see where he's going.

It could be the culture of Evergreen. No Greek system, a fairly young college and you know, Evergreen. So, maybe we are a college town, its just harder to see because Evergreen is different, therefore its impact on us is different.

That said, I think there's something else to it. Evergreen in a lot of ways isn't in Olympia. Literally a college in the woods.

So, for someone like me, getting to events out at Evergreen can be a pain. Out of site, out of mind. But, that's sad because a lot of cool things happen out at Evergreen. If Evergreen was centered around where we all lived. Like say, in a fit of rewriting history Evergreen was where the Automall ended up, wouldn't we as non-Greener residents be at Evergreen more often, just because it was there?

I know sports is like this for me. I end up going to more high school and St. Martins, South Puget Sound Community Colllege athletic events because they are held nearer to me.

That said, because of field conditions Evergreen soccer was forced to play at South Sound Stadium. I really wish I heard about it earlier or it was on a better night for me, because I would've loved to have gone.

From the Olysports Blog (an effort you should suport, by the way), it even looks like there was a crowd at the game:

I could go on longer, but we could be prouder of Evergreen around here. There are a lot of proud graduated locally, but we should be even prouder. Sports is a big part of how people think about a school, and the easier it is to get to an event, the more fans you might have.