At first blush, I was confused by the election results for the Olympia city council. Across the two contest races, I assumed there would be some difference between the four candidates that ranged across the city's political spectrum. In one race, we had a fairly right candidate (Mike Volz) against a neighborhood based centrist (Julie Hankins). And, in the other, we had downtown business centrist (Cheryl Selby) against downtown business further left (Darren Mills).

Both Selby and Hankins won their races by health margins, showing an overall preference for centrist, I suppose. Even if you look at the precinct level results, both Selby and Hankins both had nearly clean sweeps across the entire city. Mills only won a handful of precincts and Volz didn't win a single one.

What was shocking to me, was that even on the precinct levels, the margins of defeat for Mills and Volz were similar. Meaning, it is possible (though unlikely) that the same voters who chose further right Volz also chose further left Mills. I think this phenomena is more a trick of the numbers. While voters overall went for the centrists, I don't' think there's much cross over between Mills voters and Volz voters.

Take a look at the precincts each did well in across the city. There is a distinct geographic pattern. Mills won precincts (in green) in the upper eastside. While Volz (in light red) didn't win any precincts, he did better than 40 percent in ones along the outer edge of the city. Even in the eastside precincts where he made a point of emphasizing his opposition to a homeless shelter, he did no better than 35 percent. 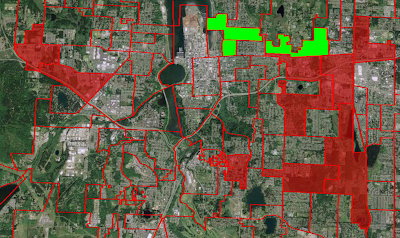 Here's another way to look at the base of both candidates. I compared how well each one did in each precinct and charted it. Volz beating Mills in on the left, Mills beating Volz on the right. 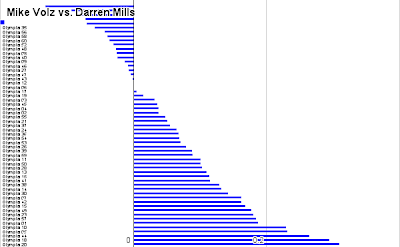 As you can see, the votes weigh much heavier towards Mills. Across the city, many more voters and neighborhoods chose Mills when they were comparing him with Selby than Mills did against Hankins. So, I doubt there were very many voters that chose Volz and Mills on the same ballot. They just both lost to strong centrist candidates by about the same percentage..