The Olympia Yacht Club is getting their Capitol Lake History wrong

Big surprise, right? Because remember these signs that tried to connect a brackish estuary with bugs that are prevalent in stagnant freshwater?

Anyway, if you head to the section of Percival Landing that crosses the access to the yacht club, you find this sign. 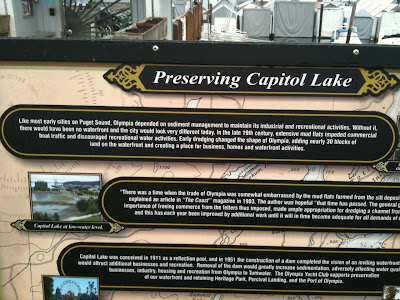 The middle panel confusingly refers to the period of time in Olympia of the "long wharf," when Olympia business interests were trying to defeat the mudflats north of downtown to find access to deeper waters for shipping. Eventually, through a combination of building the port peninsula with fill and dredging a basin, those mudflats were defeated by the 1930s.

It is pretty spurious to connect this era of filling tidelands and building the long pier to building Capitol Lake in the late 1940s.

This is really a story of two parts of Olympia, the section facing north trying to find shipping routes and the part facing south, looking at the capitol. These are really two different discussions. It took until the mudflats north of downtown were defeated in the 1930s for the discussion to build Capitol Lake to really his its stride. The Port of Olympia had been created, a channel and basin had been dug, and downtown Olympia had been filled out to meet it.

Ironically, it was keeping shipping lanes open to Tumwater that slowed down Capitol Lake for a few years. Tumwater city fathers (including the Schmitds of the brewery) didn't think it was a good idea to dam the Deschutes to stop boats from getting to their city. They were eventually won over, but trying to connect shipping concerns with the origins of Capitol Lake is wrong.

But, that isn't to say that the idea of creating a freshwater lake out of part of Budd Inlet didn't have a shipping connection at one point. Strangely enough, in the long tale of where Capitol Lake came from, there was once a freshwater lake solution to the port's mudflat problem.

Back in 1903 (eight years before Wilder and White) W.R. Brown put together a small group to try to create a freshwater harbor in Olympia, along the lines of Lake Union in Seattle. Instead of damming the Deschutes estuary at 4th or 5th Avenue, they would go out to Priest Point and build a massive berm there from shore to shore.

Like nearly all pre-Wilder and White damming the Deschutes ideas, they were actually to facilitate commerce. The Schmidts of Olympia Beer actually dreamed a plan near to what the yacht club sign describes in 1895. The beer family thought that by creating a lake, they could ensure steady boat traffic to their brewery. But, those plans faded and by the 1910s, Tumwater and the Schmidts were opposed to any sort of damming, up to the point of roadblocking a 1915 plan.