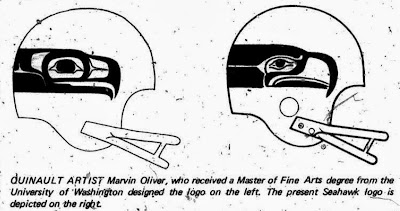 Just about a year before the Seahawks finally took the field, they were in a somewhat similar position as the Washington NFL franchise is now. The logo the Seahawks had been handed by NFL designers didn't directly borrow from local tribal design standards. The King County Arts Commission complained that it "fails to accurately depict the art principles of Northwest coastal Indians."

From the Northwest Indian News (a newspaper) in September 1975:


Among the differences found to be inaccurate is the characteristic eye form. The Commission enclosed a suggested correction by Marvin Oliver, Quinault... Oliver depicted regional art principles in the design.

It shouldn't surprise me at all, but the original Seahawks design came from people working out of Los Angeles. I kid you not. I can just imagine the designers in the LA spring, cracking some books on Pacific Coast tribes, copying down ideas.

The Arts Commission further stated, "As with all great art, a full understanding and appreciation does not come quickly. Hence it is not surprising that the new logo fails to depict with adequate sensitivity the arts principles of the Northwest coast Indian peoples."

Since that first season, and the back-and-forth between the commission and the team, the logo (especially in the eyes) has strayed even further from Oliver's suggestions (from From Rain to Shine).

Native Appropriations brings us to the today, nearly 30 years into the Seahawks design. The blogger, a tribal member and law student, is writing about a particular use of the Seahawks logo that incorporates even more tribal designs. She like it, but examines where it fits in culture:


...I question my endorsement after my analysis naturally evolves into larger questions about art, identity, acceptance, and what happens when Native cultures live harmoniously (or at least not so adversely) with others?

Where we start to move away from imagery of a fan’s foam head towards a fan’s headdress or mask is the face: the two green paint lines on the cheek suggest the 12th Man is wearing “war paint” instead of mimicking the black grease or tape the players use on their cheeks to cut down on glare. Now it’s starting to look more like a hipster appropriation and misinterpretation and I wonder – was the inspiration for this design a transformation mask?

thanks for sharing the informative blog, but why do you not mention any country name? I think the United Kingdom is king country for Top Logo Design Company and work-related, I saw many students, who do work part-time for a Logo, web, and application development services provides