Duane Moore and the Black Houses

Black houses of Olympia by Jeremy Quist (via flickr) 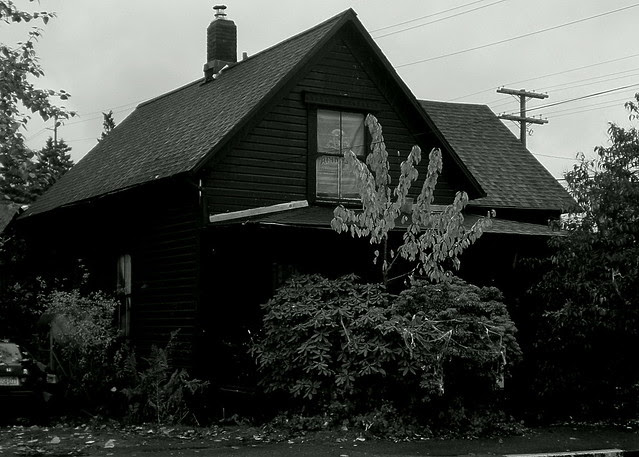 People are trying to create a mythology around the Olympia Black Houses that simply doesn't exist. There's no evidence that Duane Stephen Moore is anything but a typical small business owner (in this case a dentist and a rental owner) who has unique atheistic tastes.

So, that's my conclusion. Yesterday I put up a map I'd been working on of all the rental houses that Moore owns throughout town. Olympia's biggest urban legend in recent years has been that there's something sinister about the houses, that if you mapped them, they'd make a pentagram.

I don't know what you can see, but there's no pentagram there for me.

Take away the black paint that seems to touch almost everything (short of the Reef Bar downtown) he owns, Moore seems like a pretty typical entrepreneur. He owns over a dozen rental houses, at least three commercial properties, owns a construction company (to hire sub-contractors to take care of the rentals?) and is an active dentist in Shelton. If the color were blue or yellow (or blue and yellow), I wouldn't be writing this post.

Also, there's nothing in the Olympia code to prevent anyone from painting their house black. So, if the city is fining him for having black houses, I'm not sure why.

I didn't talk directly to Duane (or indirectly) when I was putting this post together. Neither has anyone else that's written about the black houses either. He's been referenced a few times in the local paper, but never directly quoted. That gave me the impression that he's someone that values his privacy.

Also, if I stand by my "regular guy, interesting tastes" position, then I wouldn't call him, because there'd be nothing really to discuss.

Nik Neburn made the movie I linked to above about the Black Houses. He also made an interesting documentary about the Paul Ingram case. Nik quotes Norman Cohn to make a point about the Ingram case that I think applies to the black houses too:

To understand why the stereotype of Devil-worshiping sects emerged at all, one must look not at the beliefs or behavior of heretics [...] but into the minds of the orthodox themselves.

While Olympia hipsters are hardly religious fundamentalists, the stories surrounding the black houses do more to cast Olympia overall as a weird and interesting place than to explain anything about Duane Moore or the houses themselves. Because we want Olympia to be a certain way, we make the houses seems weirder than they actually are. And, if it wasn't the black houses, we'd find something else out there to make up stories about.
Posted by Emmett at 12/19/2013 05:42:00 AM

How can anyone say these East Oly black houses have nothing creepy about them other than the black paint?
Nearly every one has some sort of disembodied doll or toy hanging in a tree in the yard. As well as broken bowling balls, mutated bicycles, and old furniture being overgrown with blackberry bushes. You are sure to also find somwhere in the front yard various types of burnt plastic objects. Many evenings you will hear a half dozen large breed dogs bounding around inside making the house and causing the property to emanate the noises of a demon hoard.

There's trash in the front yard, lots of dogs and blackberries take over?

I rented from him. I'm not a hippy. It's true that he values his privacy. Such that if you want the ant problem taken care of (we're talking streams of ants coming out of outlets to tackle your cat's food), he will simply respond "It's that time of year" and never talk to you again about it.

He's also kind of an asshole, as anyone else who's rented from him in the past. I'm glad I don't have to live in one of his 'black houses' anymore. Duane is a slumlord, his aesthetic is neglect, and his dental work is a joke. For a satanist, or whatever he considers himself, he makes a damn good capitalist.

I know one of the tenants. Manium LLC is trying to stick this person with a surprise $14,000 rental bill. Any witnesses of the 'decrepit aesthetic' being used as a pretext to let everything fall apart? Pretty much any witnesses could help my friend out.

Best landlord ever. Give him the check and every one is happy. I love the ability to just..DO stuff to, like fix crap, landscape however I want..most peeps say no, you can't fix the leaky sink..there's a guy for that he will be there next month, maybe..f that, I remodeled the whole kitchen. Dug out the crawl space and put in a basement sauna. It's awesome

I am a renter of a black house and yes, he is a slumlord and yes these houses are junk.

I used to live next door to one of his houses that was coincidentally not black, but bright yellow. I heard from the neighbor himself that there is one room, locked off that they couldn't access, and he had it "filled with demons".

i did live in a black house on puget st. but i got kicked out for spray painting two pentagrams. one on the front porch and one on the back of the bathroom door. we paid our rent to the house manager who lived in the garage. i have never met Duane or even talked to him.

The owner is indeed a Satanist. A close friend who was badly in need of a job, took a job as a manager of one of his black apartment buildings and knows that Duane Moore is a practicing Satanist. He usually rents to fellow Satanists.