Update 8/22/2021: Given a few years learning more about Olympia's past in this era, I am less surprised that Olympia was pretty racist in the 1960s or that Mike Layton himself was even more racist. Thanks to Robin in the comment below for spurring this update.
I'm going to leave this post in place, but I want to add a few thoughts up on the top to sand off the edges a bit. Specifically, the word "ghetto" is used in a way that may have had more nuance for Layton that I realized. Now I have come to understand that it was meant to imply the negative economic result of segregation. That if kept separate, one race would economically suffer, creating a housing ghetto of less desirable neighborhoods. The "happy situation" he was referring to could have meant integrated neighborhoods. I'm willing to give him the benefit of the doubt there.
That said, the implication that black residents would be happier if they didn't advocate for change is heavy in this piece. I'm not sure if Layton is writing for himself or pointing out the obviously wrong white point of view here. But that part still troubles me.
Read this crap (full size version here): 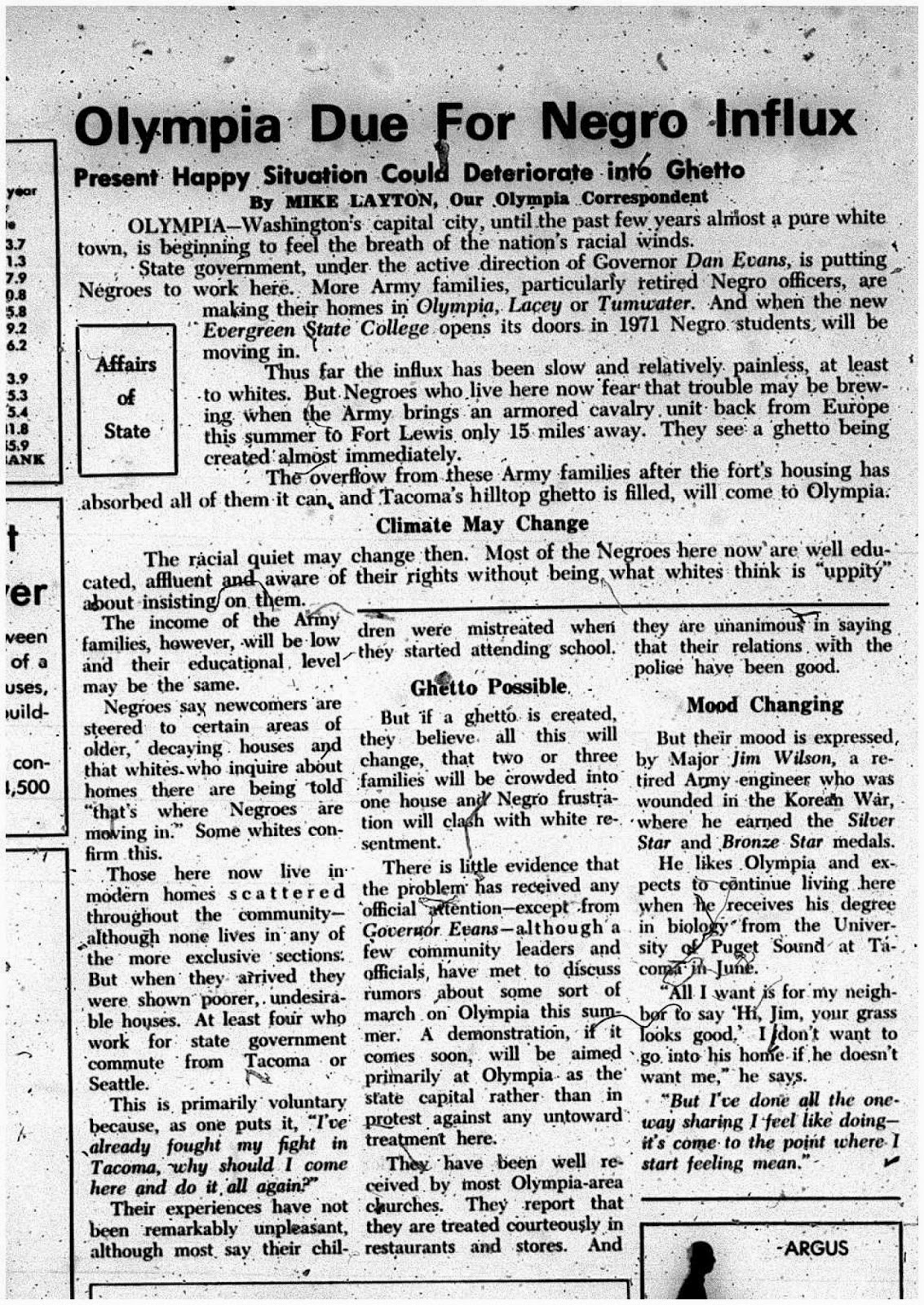 Let it soak over you.

...Negroes here are well educated, affluent and aware of their rights without being what whites think is "uppity" about insisting upon them.


This was published in the Seattle Argus in April 12, 1968. Martin Luther King had literally just been assassinated the week before. I have no idea about the weekly Argus' news cycle, but it seems at least in bad taste to publish something like this a week after the civil right's leaders death.

At worst, the Argus editors and Mike Layton deliberately chose the week after King's death for this. "Hey Layton! King's death sure is leading the news, let's do up a piece about how Olympia is being ruined by his sort!"

And, let's get this straight. This was main stream thinking for our community. The Argus, while not a major daily like the Times or PI, was a serious Seattle newspaper. From what I've read about it, it would be close to what we'd consider the Weekly to be. Old time and storied reporters like Shelby Scates and Mike Layton passed through the Argus at different points.

And, let's get back to Layton, who wrote this piece. When he passed away in 2011, there was a lot of good things said about him. "He bluntly spoke truth to power," "a fierce reporter" and "could spot B.S. at a hundred paces."

Well, that's a funny way to put it, because the level of bull shit in Layton's Argus piece the week after King's death is amazing.

Olympia has obviously changed. Thurston County used to vote for Republicans (and Reagan specifically) and used to put up with this kind of racist crap. I'm not saying we should go back and absolutely revise Layton's reputation, but we need to remember that this used to happen. And, we weren't always nice, friendly liberal people.
Posted by Emmett at 1/20/2014 06:43:00 AM

I know this is old, but I can't let your misleading comments lie. Mike's article is clearly on the side of the anticipated "Negro" (accepted term at the time) newcomers. The "scare" he's attempting to put into the community is clearly that an unadmitted but very real Jim Crow element in Olympia would exert itself, and the injustices that African-American residents were already facing would be multiplied, up to and including corralling newcomers into a ghetto where their lives would be even worse, at the hands of racist local practices.

When my family moved to Olympia in 1970, my parents noted the same atmosphere, for example, having realtors refuse to show them certain houses because "that area isn't for white people". If you actually read Mike's copy, that's what he's bemoaning, and the possibility that such unchallenged policies could metastasize into full-blown segregation if still in place when the projected newcomers arrived.

This article is not an incidence of racism; it's the opposite.

I knew Mike Layton. He was famous for his anti-rightwing sentiments, to the point of landing on various state and federal hit lists. He did guerrilla journalism in Latin America during the dark and dirty Reagan regime, exposing the atrocities of US-backed death squads. Dixy Lee Ray named a pig after him, the better to enjoy slaughtering it.

It's all nice and fun to play righteous indignation now that the attitudes Mike fingered in this article are uncool. When he wrote it, his opinions were provocative and personally dangerous, and he has nothing to apologize for to a future generation that's never had to put its butt on the line for anything.

I updated the post with some thoughts above. I appreciate your thoughts on Layton, and I do have some more nuanced view on things now. I don't want to let him completely off the hook, because to be fair, there is a lot packed into that piece that makes me shake my head. I didn't want to let myself off the hook, either, which is why I updated the post and didn't leave it crammed down in the comments.