Cascadian religion is pretty unique. Compared to other parts of the country, religions up here are fairly diverse overall and we have the highest percentage of people that don't claim any particular religion at all.

There is some debate whether that means we're godless up here, but it is at least one of the things that makes us unique.

I've also pointed out that this isn't a recent development. At least since just before World War I we've had this tendency of not going to church.

So, where does this come from. How did Cascadians become the least churched region?

Those impacts, from personal freedom to friendly business politics, had a deep impact on religion. At, least from what I can see.

In my first Cascadian religion post I pointed to two maps, one on religious diversity, the other on religious adherence. Cascadia was one region that was high in the former and low in the later. There was one other region (actually a subset of a region) that showed the same trends, the upper Ohio Valley of Appalachia: 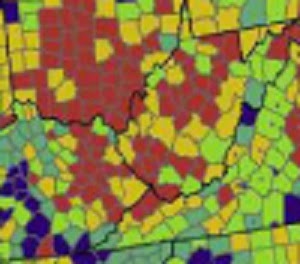 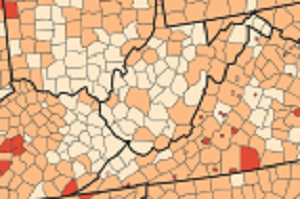 Now, this can be a bit misleading and may only relate to Cascadia from a high altitude. This region likely is much more religious than Cascadia in a going to church sense. But, because there are simply so many religions here, they can sometimes be under counted.

...the southern areas with the highest numbers of unaffiliated and uncounted people are in the Appalachian counties of West Virginia, Virginia and eastern Kentucky -- home to countless evangelical Protestant churches that are part of no denomination.


Appalachian religion is often associated with fiercely independent  Holiness sects and their rejection of educated clergy. This is but part of a pattern of persistent forms of rejection of the authority of educated professionals...


So, compared to other regions that were more homogenized and church going, Appalachia, in particular the upper Ohio Valley where many early Cascadians came from, was a rebellious soup of religion.

Compare that to New England, which by the 1840s (when migration to Cascadia had first begun) had just gone through a massive religious upheval. The Second Great Awakening was well into recession by this time, leaving behind its impact on other religious communities and New England in general:


Outside the evangelical churches there were also problems. In the early stages of revivals, Episcopalians, Universalists, and Unitarians were tolerant and sometimes mildly supportive. However, as passions heated, denominational bigotry and a doctrinaire attitude was manifested by many revivalists who denounced all who were not "born again." Often these were socially prominent people. This behavior alienated religious liberals as well as non-Christians who resented the self-righteous presumption of authority displayed by some revivalists. In and out of churches, it often became a question of power and control.

For the New England businessmen that moved to Cascadia, what they thought of religion was likely colored by cultural attitudes of the conflict after the Second Great Awakening. One New England founded frontier area (eastern New York) that predates Cascadia by a few decades was so impacted by the Awaking that it was eventually called "the burned-over district."

The number of new sects (from proto-Mormons, to Shakers and straight up utopians) rivals the home spun religion of Appalachia.

Cascadia wasn't founded by groups of godless settlers. But, it also wasn't founded by a monolithic group that subscribed to one religion. Rather, both the Appalachians and Yankees that settled Cascadia came from fractured religious cultures where individual freedom and personal attachment to belief was valued over discipline.

It is also no wonder that the impacts of the Second Great Awakening, which in addition to utopians also produced social activists pushing towards feminism and anti-slavery would grow into Cascadia's political liberals.
Posted by Emmett at 2/13/2014 06:40:00 AM