The mystery of the capitol gulch, a surprise stadium and what it means to be a capital city

Sometimes I think about what it means to Olympia to be a Capitol City. I'm not sure how many times in history it has happened, but I'm sure at least once a city has lost that status. Throughout the early history of Olympia, that tension, the possibility that Walla Walla or Yakima or Tacoma might snatch the seat of government seems to be overpowering.

It has been decades since anyone has thought about moving the capitol or even a good amount of state employees out of northern Thurston County. But, we still make civic decisions based on our status as the seat of government. The debates about issues like restoring Budd Inlet or downtown development are influenced by the gravitational pull of the state government.

If I haven't changed the header of this  blog by the time you read this post, you'll see the graphic is a detail of a Sanborn map of Olympia. You'll notice a gulch that no longer exists running through what is now the capitol campus.

Here's another map from 1919 that show it in much better detail (via Washington State Digital Archives): 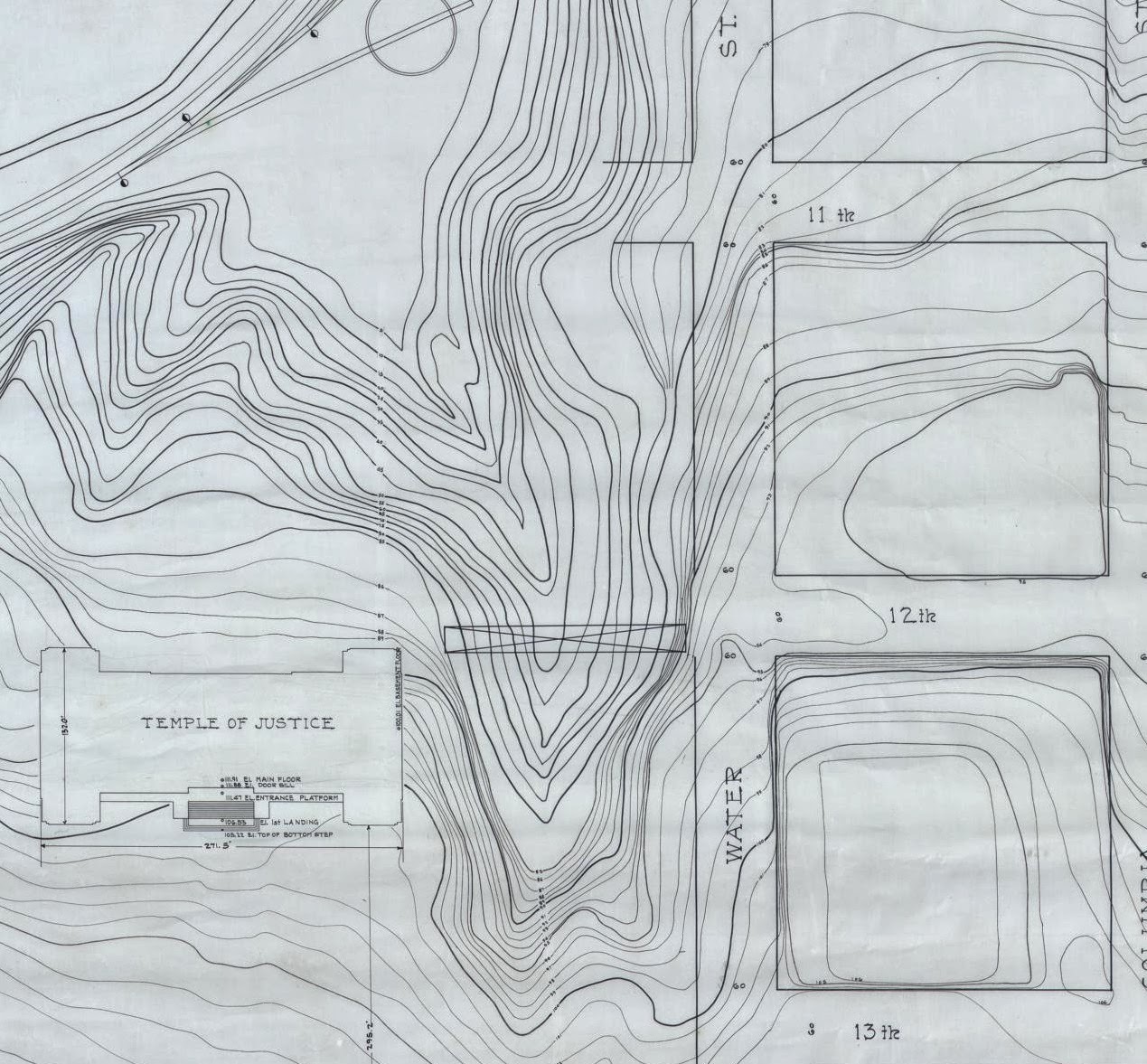 The history of this gulch has always fascinated me. I've always wondered where it went, who decided to fill it in. It seems pretty straight forward given the context of history. In the early 1920s the campus was being developed. The gulch was in impediment to that development, so it was filled in.

But, I could never find a record of when or how it was filled.

Recently I learned the gulch had a bit more interesting of a history than just a former ditch in the way of a beautiful campus. As state leaders were gathering ideas for the layout of the modern campus in 1911, they decided a stadium would be built inside the gulch 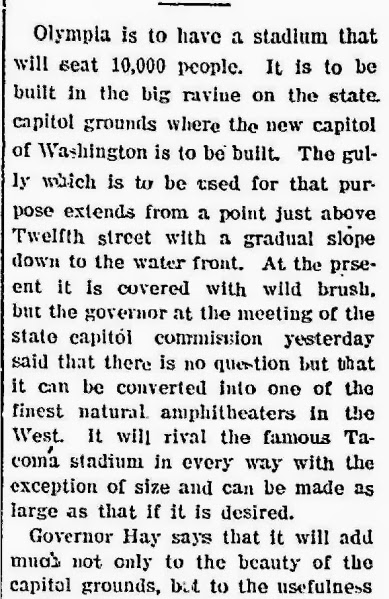 The Stadium Bowl had just been finished in Tacoma inside a similar Puget Sound gulch, and local leaders imagined the Olympia Bowl as a smaller version.

But, as the capitol plans were slowly rolled out over the years, no stadium was ever included.

The proposed stadium was almost totally forgotten until local leaders tried to bring it back up in 1921. They not only wanted a stadium, but to save what was left of the gulch itself, which had been used as the trash bin for the capitol builders.

But, obviously the gully was filled and the stadium was never built. In 1922 30,000 yards of dirt were hauled to the gulch by the contractor who was grading the campus, finishing off the gulch for good.

Now, obviously the gulch still haunts us. All that fill is slowly working its way downhill, to the point that the beautiful greenhouse that sites right on the crest of the fill closed six years ago.

Filling the gulch to create a even lawn running up to the campus and not building a stadium is the type of choice that capitol cities make. Olympia did need a stadium. The old Athletic Park  wasn't much. And, even Stevens Field (new in the early 1920s), when compared to a possible Stadium Bowl on Budd Inlet, doesn't exactly shine in comparison.

A nice clean campus is good for state government, it just looks nice.

A utilitarian and centrally located stadium would've been good for Olympia. These are the things we give up when we decide to fight to be state capitol.
Posted by Emmett at 2/17/2014 06:17:00 AM