How downtown Olympia was almost ruined by I-5

Shanna Stevenson's chapter in "The River Remembers" (edited by Gayle Palmer) is a thorough history of transportation through Tumwater. Most of it is a lead in to Tumwater's most notable historic wound, the construction of Interstate 5 through the historic center of the city.

Stevenson's history includes an interesting footnote on what could have happened if Olympia had gotten its way. Instead of going straight through the old Tumwater historic neighborhood down by the former Budd Inlet waterfront, the Olympia city leaders wanted the highway through their city.

The proposed route was to loop the interestate through the town coming from the west through the Percival Creek canyon. Then, it would go through downtown in a tunnel under 10th or an elevated roadway over 7th.

So, the two options both included a highway at the foot of the capitol campus. Option one was a new tunnel. Option two was a viaduct running just south Sylvester Park.

This overlay of Olympia in 1941 with our current roads shows exactly why this was feasible. Even though the old Swantown Slough was filled for decades by this era, very little of the south end had been developed. 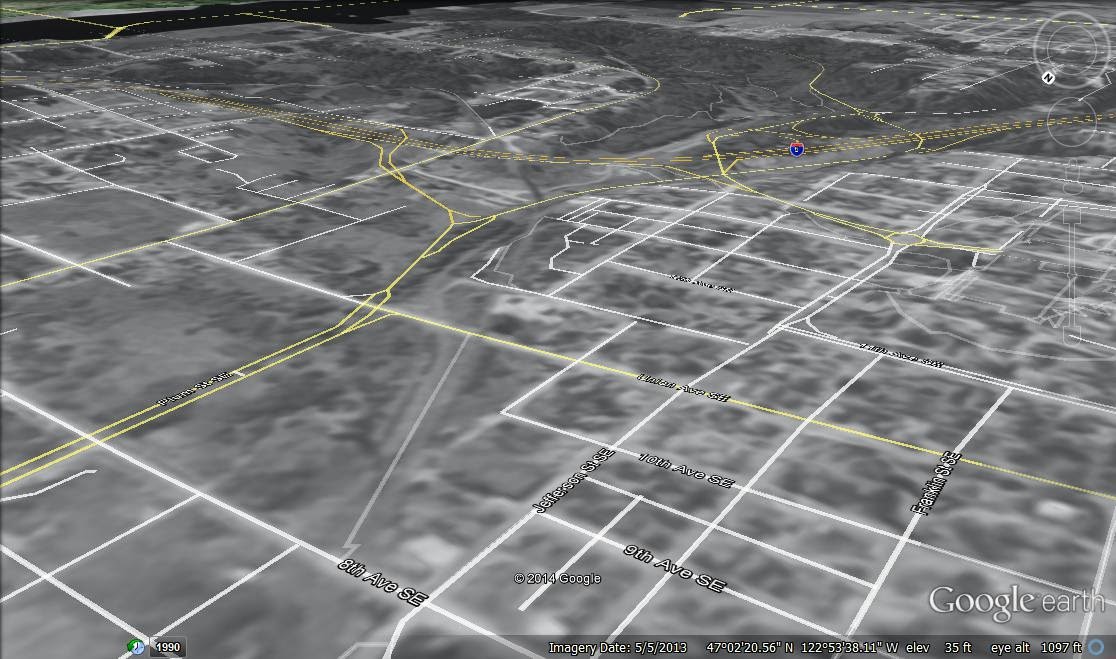 After finding a way through downtown, it would have been easy to route the interstate through the rest of town.

I also find it interesting that when this plan was seriously being considered (1952 through 1954), it was the early days of Capitol Lake. The city was advocating for a major interstate to loop through a place that they'd just spent more than a decade pushing to become a lake. Hardly fitting the Wilder and White vision of Capitol Lake creation, I'd say.

Of course, Capitol Lake then was hardly the park rimmed area it is now. In the 1950s, the first lake park was still ten years off. There was still a major rail yard on the south bank under the capitol and industrial buildings were still on other banks.

So, in the mind of the city leaders, in the early 1950s, the lake being the setting of a major downtown park was hardly in the plans.

Going through Tumwater ended up being cheaper, so the state highway commission chose that route. But, it wasn't because Olympia didn't want it.
Posted by Emmett at 4/14/2014 06:51:00 AM

Where was this? The map could be interesting were it readable. As is, it is not, and the article alone is not descriptive enough to make clear where the proposed gash would have been.

You do raise a valuable point and possibly the nucleus for an interesting study or book, on how some of the thousands of communities across the country redefined themselves or not after the interstate came.

I grew up in Seattle, where I-5 gouged its way through several neighborhoods, crudely transforming the remaining communities within the scar zone.

When years ago I moved from Seattle to Olympia, I was puzzled by the lack of a downtown for either Tumwater or Lacey until I understood that they had been lost to tons of flat concrete. Each has attempted to find a new center, but neither has much of a heart.

Glen, this is generally the area east of downtown towards Plum. I was thinking of doing a google map with the proposed routes (as I understand it). I'll get on that sooner than later.

Also, Lacey didn't exist as a city until after I-5 came through, so they didn't really have a downtown to speak of to be destroyed.

Also, I'm not a big believer in the story that Tumwater "lost" its downtown because of I-5. Certainly I-5 covered a historic neighborhood. But that particular neighborhood lost its relevancy in the 1930s when the Carlyon Bridge created a bypass over the Deschutes. When I-5 came through, it wasn't much of a downtown.

The downtown freeway tunnel is an interesting what-if. I suspect the Tyee Motor Inn (or something like it) would've been somewhere near Mottman Industrial Park instead of south Tumwater. Additionally, some of Olympia's downtown gas stations might've survived to the present.

Lacey's "downtown" pre-freeway was the stretch along Pacific Ave just east of the old entrance to St Martins campus. It was the location of their NP Depot and there were a number of facilities including a school, churches, filling stations, motor camps and cabins and grocery markets, notably Foy's Store. The freeway and South Sound Center didn't destroy downtown as much as create a new center, leaving the old district to wither. (The first location of Music 6000 was in a the old church at 6000 Pacific Ave.)

It'll be interesting to see what Lacey does with their new museum when it's built- I suspect it'll be an ongoing battle convincing folks there's "there" there.

Neither Tumwater or Lacey actually ever had much of 'downtown.' I-5 did put a dent in the available space for Tumwater, but Lacey never really existed prior to the South Sound Center. It primarily was the industrial space between Olympia and Fort Lewis along Martin Way and Pacific Avenue.

Don't forget the other "industry" along Martin Way. Sheriff Don Redmond shut down all the "massage parlors" that popped up in the '70s.