1. One Oregon governor famously said: “I urge them to come and come many, many times to enjoy the beauty of Oregon. But I also ask them, for heaven’s sake, don’t move here to live.”

Irregular Times though ranks Oregon still pretty highly in the “Welcome to (this state)… Now Go Home!” race, but just outside the top 10. Washington State is downright mediocre at #25.

What's going on here, what happened to our "get out of our fine state" chops in Cascadia? My guess is that McCall was a bit of an outlier, a pre-Big Sort voice chaffing against the Sort as it was just beginning to happen. The industrial big states were just falling apart during McCall's time as governor and Oregon and Washington were just then being seen as nice places to live.

McCall himself was almost symbolic of the post-World War stability that had laid itself upon the Cascadian states before the Big Sort began to move things around.

2. This is the most bad-ass Facebook fandom map yet. Some folks have used these sort of maps to make a point about greater bioregonial Cascadia. Their point is that since people in Boise or Spokane watch the Hawks or the Mariners, we're all one big Cascadia.

This map shows that Mariner fandom wanes quickly one you leave the coast. Granted, this might not be the best time to use the Mariners (I'd like to see an NFL map), but take a look at Boise. The gray is Yankee fandom, the light blue is barely Mariner fandom and the pink is Red Sox. 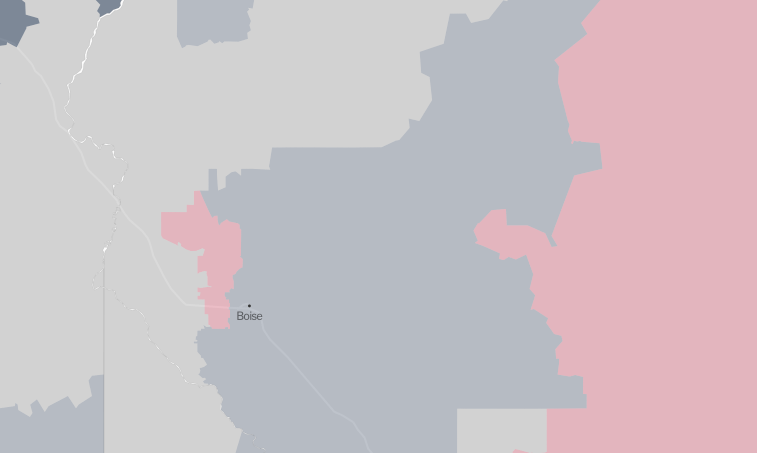 Still plenty of diversity, but hardly core Cascadia sport fans out there.

3.Again, more about the debate on how far east Cascadia goes. I'm still very much a Cascadia as coastal nation sort of person. I'd argue that places like Boise (in addition to not liking Seattle sports) and Spokane are tied more closely to the great interior West. That arid West is very much not like Cascadia.

Matt Shea isn't the most insane Republican from eastern Washington. He's from suburban Spokane, but he doesn't talk at all like a Cascadian.