How I was wrong about the history of Capitol Lake

One little detail. But, I can admit when I'm wrong. Here's one passage in a history I wrote of the formation of Capitol Lake:


Depending on the source, one of two things then happened. Either the state capitol committee rejected a lake altogether or they accepted the Olmsted’s earlier limited version.

In the late 20s, Wilder and White and the Olmsted firm participated in a back and forth over the landscaping plan, with the state capitol committee in the middle. In one telling, the result was that all waterfront improvements (including Capitol Lake) were written out of the landscaping plan (Johnston, 91).

According to another Capitol Campus historian, Mark Epstein, Capitol Lake was retained in the 1920s landscaping plan, but in the form of Olmsted’s modest saltwater tidal pond rather than an aggressively dammed estuary (Epstein, 67).

Also, ten years after he first proposed it, damming the Deschutes apparently was not in the front of Carlyon’s mind. As Wilder, White and the Olmsted firm debated landscaping plans that could have included a lake, Carlyon wrote an essay about the vision and construction of the capitol group. Lacking from the essay is a single mention of a lake (Carylon, 1928).

Even though it was rejected in 1916 and was an afterthought in Carlyon’s mind by 1928, the lake project did not go away.

This passage had to do with the late 1920s when the capitol builders were putting the finishing touches on the original capitol group. It was also just about 10 years before the successful (and locally originated) effort to build Capitol Lake.


From what I  found in a 1929 Seattle Times piece, I wasn't totally correct:

A small difference I suppose. But, a big enough difference to add another sentence to that section in the piece I linked to above. It was a proposed lake. It had been proposed in 1911 as part of a locally funded package of civic improvements. Again in 1915 by local politicians as a solution to transportation problems. It was also proposed in 1897 as a grand freshwater port scheme: 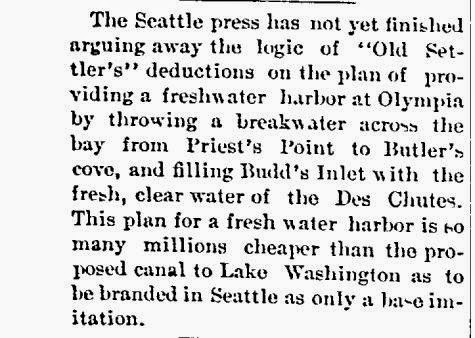 It was proposed a lot, but it wasn't the centerpiece of a grand plan for the capitol campus. It was an old idea by 1911 that had been kicked around and recycled several times in various forms of urban renewal and natural resources destruction.