What was going on in Olympia 30 years ago?

Local arts activists lobbied for and built the Washington Center for the Performing Arts.

The first part of the 1980s was a big time in Olympia. Things were happening, people were getting things done. But, why?

I might just be cherry picking historical events, pointing to them and saying "hey look, something was different here," so correct me if I'm wrong. But, it really does seem that those years in the early 1980s were a time when things changed around here.

One simple reason could have been the influx of new residents in Thurston County. If you look at Olympia's population alone, the early 1980s was a time of steady growth. But, in broader Thurston County, population took off in the 1970s. 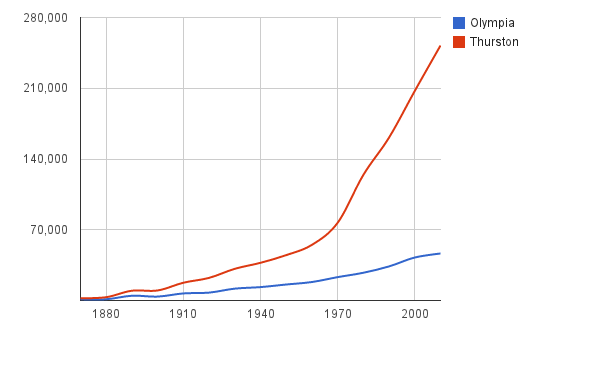 This population increase must have had an impact on our local culture. I wouldn't assume a fundamental change, but certainly making people and organizations more active, more open to change and new projects.

Now, I'm just spit-balling, but I'd assume that a bunch of these new residents came to take state jobs. I've read that state government (during the Dan Evans administration) expanded greatly in the 1970s, taking on more roles. And, because of a 1950s era lawsuit, much of this growth took place in Thurston County.

My guess- that's about as long as it took people who relocated to Olympia attend TESC in the early 1970s to graduate, get established in a career and get involved in local issues in a meaningful way.

The elected Officials Chronology at your last link is interesting. Among other things, it shows that Olympia had a female commissioner/mayor in the mid 1950s, but that it was not until the '80s when women again formed part of the ruling body.