The long history of hating and loving Boeing

When we jump on the bandwagon around here, we sure do jump on hard:


Senator Bone attacked Boeing in February and March of 1934. He referred repeatedly on February 20 to an unnamed "air- plane factory" that had "made 90 percent profit out of the Govt." and proclaimed that he did not want his country to be "helpless in the face of the inordinate and extortionate demands of privately owned airplane companies." On March, 6 the senator went further, he named names. As part of a broader attack on firms that did business with the federal government, he charged that Boeing had made profits of 68 percent on navy business and 90 percent in its dealings with the army, and he complained about the company's employment, at $25,000 per year, of a vice president to solicit business from the federal government. For the Tacoma Democrat, money and politics mixed in alarming ways.

Less than 10 years later, the Seattle Chamber of Commerce would join with labor leaders to rally for Boeing. 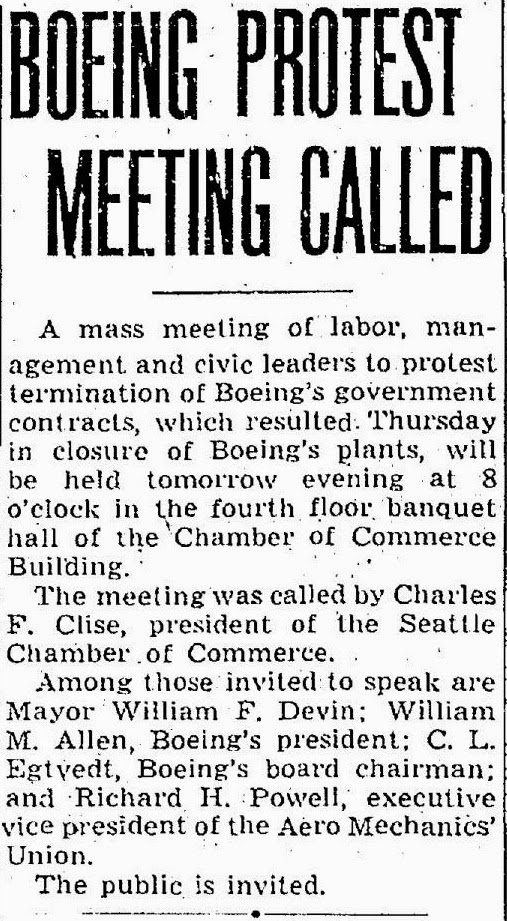 The quick turnaround in the political and cultural center of Washington state towards Boeing obviously had more to do with World War II and the company's ability to capitalize on the war. Boeing had gone from a small-to-medium size operator in the airplane industry to the center of the Puget Sound economy. Almost 20 percent of the entire workforce of King County was somehow connected to Boeing by the end of the war.

This turnaround, from whipping boy to savoir isn't untold, it may just not be well understood. Other people have written about it, but usually just in the terms of I outlined above, which can be pretty simple.

But, there are a few more wrinkles I think worth exploring.

First, Senator Bone. If you like my Business/Libertarian or New England/Appalachia duopoly of Cascadian politics, Bone falls into the Libertarian Appalachian wing. Firmly anti-corporate, Bone took a shot at Boeing in the same way that Washingtonians took shots at the rail-road companies. His political tradition fell from the same tree the spawned anti-corporate talk at both the Washington and Oregon constitutional conventions.

Also, it is hard to understate the double impact of the Great Depression and World War II had on reshaping our region. Nominally, we were friendly business Republicans region prior to the 1930s, but the political map was whipped clean in 1932.

But, with World War II, the inertia from the 1930s began to recenter towards business in the 40s. Youngins like Scoop Jackson and Warren Magnuson were much more friendly with the traditional New England political thought. And, by the end of the war, Washington's economy and culture had changed, and a cadre of young business friendly Democrats were ready to fight for Boeing.