A far as my lazy bones are concerned, 1852 is the earliest point you can really go and see what Olympia was all about. The Columbian (between 1852-53) is available online via a searchable database.

And, from that source, we can see what Thanksgiving was like in that early Olympia fall: 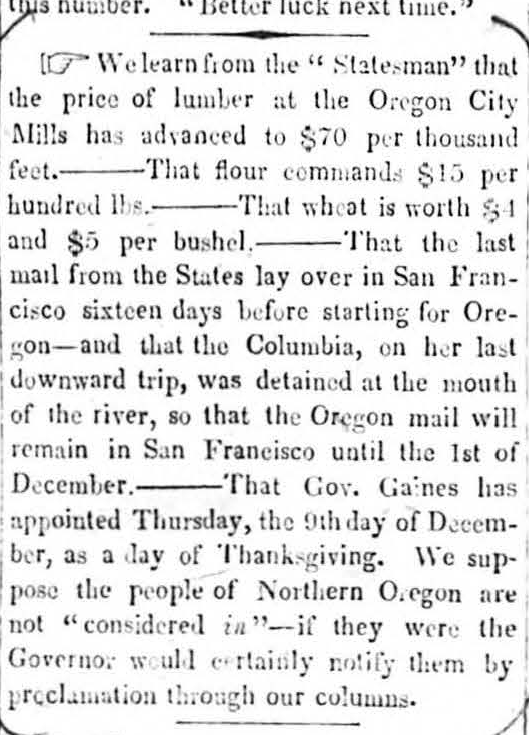 Olympia existed, but it was still a part of Oregon itself, the Columbia or Washington Territory was still yet to be born the following spring. A convention had just been held advocating for secession from Oregon. And, yet, even still, the governor of Oregon couldn't bother to let Northern Oregon know when Thanksgiving was going to be.

The late date of 1852's Thanksgiving in the unified Oregon is a nod towards the squishiness of our most American holiday. Only six years before had a Thanksgiving campaign been started and it wasn't until the 1860s that Lincoln got around to the national holiday.

If you then scroll back to near where we celebrate Thanksgiving now (the Saturday, November 27, 1852 edition), the Columbian features a letter to the editor that marks a much more important celebration for Olympians. The Monday before had been the first day of school in the city.

Set aside the "idleness of Indians" (because Indians weren't and aren't idle), the letter spells out a pretty interesting vision of America, education and civic life.

To a point Thanksgiving has now retreated back into the family. Like that, education is often seen as a benefit to family (if I don't have kids, why should I pay for schools?) and not the community. This letter seems to point out that there was always that sort of short-minded counter argument to public education:

Think of it ye calculating men on this side of the continent, who let a few dollars (perhaps a single day's work), stand in the way of educating your children. Do you say there is less need of education now than two hundred years ago? Will there be no need in the future of intelligent men and women?

The letter writer harkens back to the educational standard set by the most New England of New Englanders, the Pilgrims. And, of course, Olympia in 1852 was at the moment being settled by communitarian New Englanders and individualistic Appalachians. This debate on education was part of the friction between the two groups that eventually made us the way we are today around here.

And, yet, we still have the debate. Enshrined in the 1889 state constitution is the paramount duty of education, carried forward by the Pilgrim tradition written about in 1852. Hardly anyone argues that we shouldn't have schools at all, but we're working hard to avert our eyes from the promise our state made. And, the pressures that keep us away from that promise certainly are the same ones that talk about low taxes, smaller government and the power of the individual over the community.

So, happy Thanksgiving. Be thankful some New Englanders opened a school in late November 1852. Otherwise we'd wouldn't be "a people too enlightened to be enslaved, too virtuous to be bought."