Boy, they really scraped the heck out of old Tono

I've written a few times about Tono, here at this blog and over at Thurston Talk.

The thing that surprises me every time I run into details about that old town is how total the destruction was. The town doesn't just not exist anymore, it was decimated. The very soil that it was on was moved away.

For the uninitiated, Tono was a small coal town just south of Bucoda and Tenino. From my Thurston Talk piece:


In 1932, as the Union Pacific was shifting from coal to diesel engines, the rail line sold the mines and the town to the Bucoda Mining Company. By the 1950s, most of the old town had disappeared and the mines closed down. Some of the old buildings were moved into neighboring towns. Only one couple, residing in the old superintendent’s house, stayed on the site through the 1970s.

In 1969 coal mining in the fields around to the Tono site was revived when the Pacific Power and Light company bought the land and built a new steam plant to produce power. It was during this era that the Tono site saw its largest change. The ground on which the town had sat was scraped up, in order to get to the coal beneath it. The coal mining terraforming was so severe that the town site is currently dominated by two massive ponds.

I've done overlays of old Tono before, using aerial photos from the USGS, but recently I ran into some coal maps that are published online by state DNR. These are just fascinating. Two hand drawn maps from the middle part of the century add a new level of detail to the Tono site that I wasn't able to see with the USGS aerials.

Take a look at this one in particular overlayed in Google Earth: 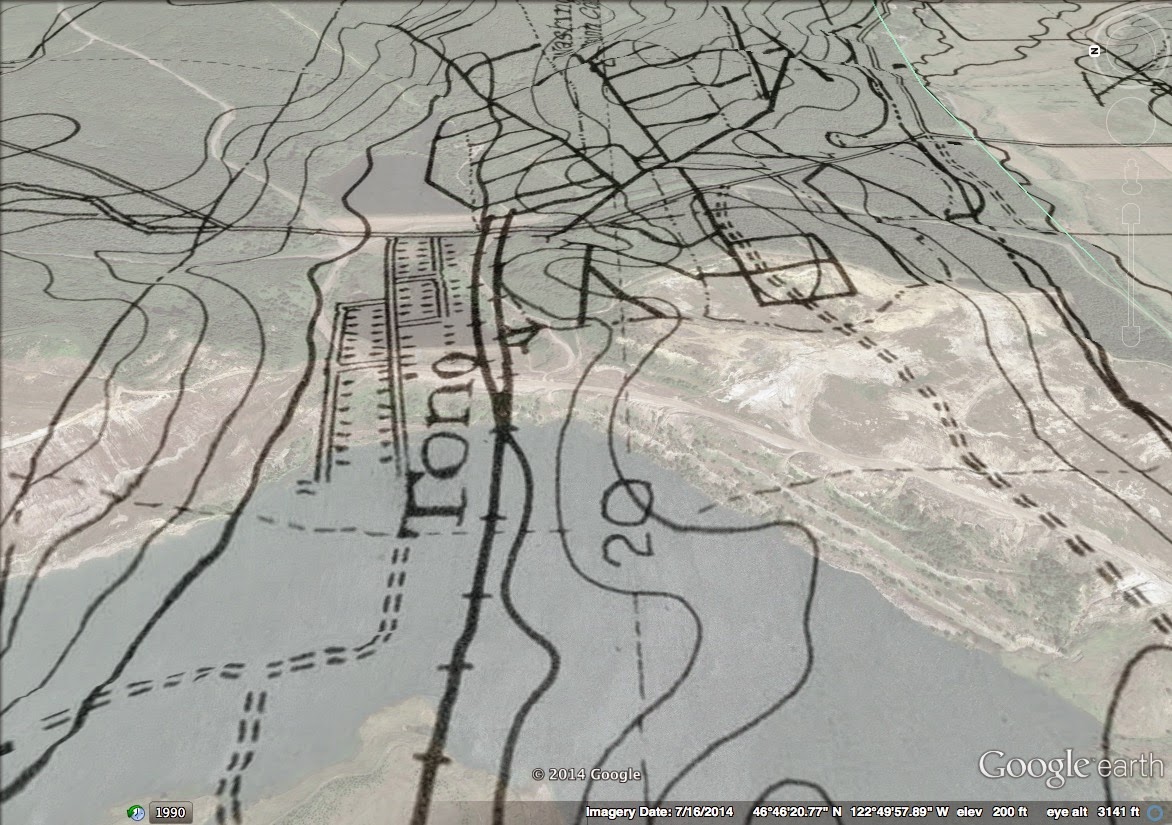 You can see that originally Tono was located in a small valley. But, in the 1960s, that valley was deepened and widened to locate the last coal deposits below the old townsite. And, if I'm correct in reading the map, the original coal field serviced by Tono was located south and east of town.

Lastly, the single structure I've seen out there (not up close) certainly is in the wrong spot to be part of the old townsite. If it is of the same vintage, it is likely connected to the mine operation itself.

Email ThisBlogThis!Share to TwitterShare to FacebookShare to Pinterest
Labels: Tono

Any pictures of the old mine in operation? Philipgarnett87@gmail.com

Any pics of old mine in operation ?